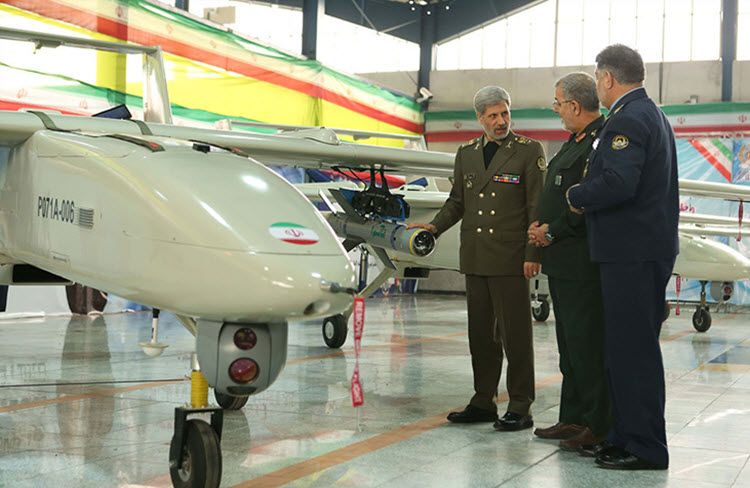 London, 06 Feb – Iran announced that it had begun mass-producing a new weaponised drone that is capable of carrying ‘smart’ bombs, which are capable of precision strikes.

Also in attendance at the ceremony was Commander of the IRGC Ground Force Brigadier General Mohammad Pakpour.

The Iranian military said that these drones “can destroy different fixed and mobile targets in day and [during night] missions, and can infiltrate various types of installations and facilities”.

Journalist Adam Kredo wrote on the Washington Free Beacon: “The new weapons will likely be deployed to hotspots such as Syria, where other Iranian-built drones have tracked U.S. soldiers and even launched strikes on them.”

Although we don’t yet know how far these specific drones can fly, we do have a 2015 quote from Brigadier General Hossein Salami, the IRGC second-in-command. He said that Iran’s unmanned aerial vehicles or drones could then fly up to 3,000 kilometres or 1860 miles, which would put Israel in range. This range could have expanded since.

These drones will likely be delivered to the IRGC, who is responsible for coordinating Iran’s regional military exploits including supporting the Bashar Assad dictatorship in Syria and supporting the Houthi terrorist cell in Yemen.

Iran’s smart bomb-equipped drones were last heard about during military drills in October 2017, but the American Enterprise Institute was doubtful of Iran’s claims.

They wrote: “More likely, the Iranian military has successfully wedded bombs onto its GPS-directed UAVs and created a sort of poor man’s smart bomb.”

Could this still be true today? Given Iran’s secrecy around its military, it will be impossible to know until we get reports from Iranian Resistance group the People’s Mojahedin Organization of Iran (PMOI/MEK) and their spies within the Regime.

Whatever the case may be, this is just another example of Iran’s military build-up in the wake of the 2015 nuclear deal, further proving that the money they received was being diverted to the military, rather than to benefit the Iranian people.