Getting Tough on Iran Will Prevent War, Not Cause It 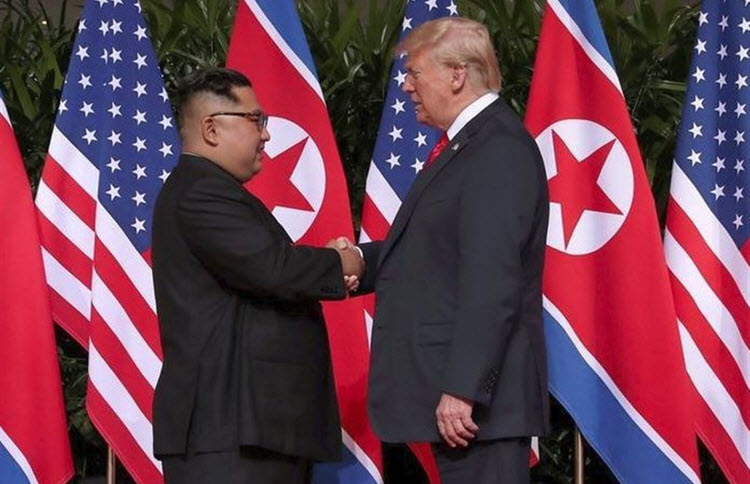 London, 14 Jun – Donald Trump and Kim Jong-Un have recently released a joint statement committing to “complete denuclearization of the Korean Peninsula” and while there are still issues to be sorted out and only time will tell if this will be successful, this moment should still inspire hope for the people of the world.

One thing is certain though, this meeting would never have happened if it wasn’t for the firm policy against North Korea by the US.

Iran is another rogue state that Trump has recently gotten tough on, which is the only appropriate way to deal with oppressive governments that commit horrific atrocities against their own people. Appeasement of such states has only ever led to conflict.

Trump’s tough tactics have garnered some negative reactions from Iran apologists and appeasement believers who say that a firm approach is akin to war and that sanctions will only lead to chaos.

This is not just untrue, but it also denies the Iranian people the change that they want. When the international community puts sanctions on Iran to bring them back to the nuclear negotiating table, it makes the mullahs weak. This will allow the Iranian people, who have been taking part in a nationwide uprising for nearly six months now, to remove the Mullahs from power with less fear about the theri security forces.

The Iranian Resistance already operates a government-in-exile in France and they are ready and willing to take over for a transitional period of six months after the mullahs fall, which is just enough time to implement a new constitution and prepare for the country’s first free and fair elections.

While there are obvious differences between Iran and North Korea, these differences actually amplify the need for a tough policy on Iran in order to tackle the Iran’s regional aggression, support for terrorism and nuclear programme.

1. Iran’s constitution lists expansionism and the export of terrorism and fundamentalism as a pillar of its survival.

2. The Iranian people are still rebelling, even after four decades of suppression. This can be seen in the nationwide uprising and the daily protests, which show that they want change no matter the cost to themselves.

3. Iran has a viable alternative, as mentioned above, in the form of the National Council of Resistance of Iran (NCRI), which is dedicated to democracy and freedom for all Iranians, no matter their ethnicity, gender, or religion.

Getting tough on the mullahs would stop them from taking advantage of decades of appeasement and lead to the collapse of the current ruling system. There is no doubt about that.

If this policy is coupled with support for the Iranian Resistance, then it would help prevent war and create lasting peace in the region. One way for the international community to do this, would be to attend the Free Iran gathering in Paris on June 30, organised by the NCRI, and hear the calls for regime change and the support from the rest of the world.

Why does Obama give Iran repeated chances?

Al Arabiya: When Obama announces that he is after...

Iran Focus Tehran, 6 Dec - Amnesty International has called for the...