Floods in Iran’s Khuzestan Cause Fear of ‘Bigger Crisis Floods’ 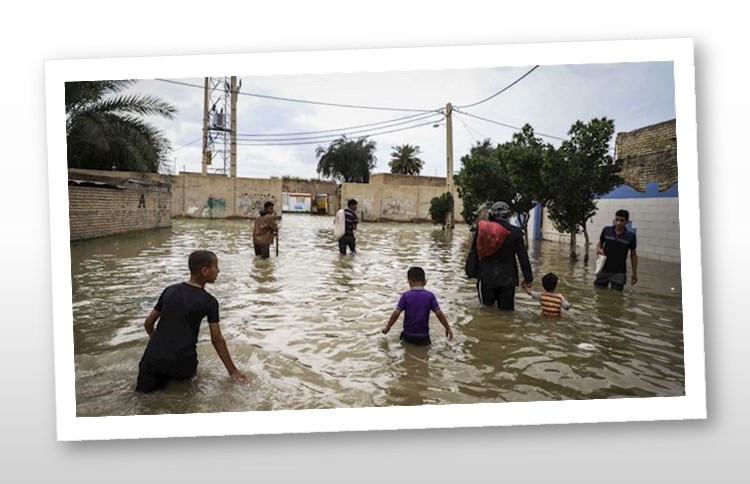 Eight months after the devastating flood that destroyed more than 25 of Iran’s provinces, Khuzestan Province has once again been flooded and completely paralyzed.

As a result of the three-hour rainfall, the city’s streets were flooded with water and sewage, and many homes in Ahvaz were flooded, offices and schools were closed too, and this was the beginning of another catastrophe for the people of this province. The traffic in the city completely collapsed. The power of the city was cut off for many hours, which increased pressure on the people.

The magnitude of the disaster was so great that the state-run Javan online website on 20 December, acknowledged that ‘water and sewage in people’s homes have taken their sleep and comfort’. It added:

“Again Rain, again flood and crisis for Khuzestan! Ahvaz is still floating in water five days after the rains, and Kut Abdullah and Kuy Alavi are plunged into the water and sewage up to the knees. Khuzestan residents who had been worried about the drought for some time, and the dust of imprudence and mismanagement had disrupted their lives, are now struggling with water and wastewater. More than a thousand districts in Ahvaz are witnessing wastewater and nearly 4,000 Ahvazi families floating in water and wastewater.”

The healthcare risks of floods in Khuzestan

In another confession, the state-run website Salamat news revealed another corner of the deadly conditions of disadvantaged people in Khuzestan:

“When the rain came to an end, the sewage with human waste surrounded the areas of Kut Abdullah, Hasirabad, Asieabad and the Ameri districts of Ahvaz. Residents in the area say it is the same after every rain. Wastewater springs from the street threaten the health of residents. They announce the collapse of houses after the last five days of rain.”

“Wastewater affects homes as well as the health of Ahvaz residents, and it is possible that the soaked houses may be destroyed while the wastewater is destroying the basement of the houses. According to locals, just a few days ago, two houses collapsed in Hasirabad. Social activists also say it is not clear who pays for the destruction of people’s belongings and the destruction of their homes.”

More importantly, after nearly two weeks of this deadly crisis, which was predicted by the regime’s meteorological office, the magnitude of the crisis will not only diminish, but it will certainly become deeper and more catastrophic in the coming days. Because of meteorological forecasts of the coming days in Khuzestan, due to the lack of urban infrastructure and structural problems of Khuzestan’s wastewater, it can now be predicted that the conditions can be catastrophic and painful.

Confirming this, the state-run website Shoare Sal acknowledged that “Ahvaz has a 2,400-kilometer sewage network of which 1100 is worn out and the minimum time required to solve the urban sewage problem is five years: “Ahvaz has no major surface water discharge systems; The Karun River and the southern branch that flows through the city of Karun (Kut Abdullah) has not been dredged, and the pipelines are cemented while passing through the city and have become virtually impenetrable. With limited rainfall, the streets are filled with rainwater and floods.”

It is also clear that despite all the repeated warnings of urban system experts, the corrupted government not only has not taken serious action to remove surface water, but they have looted the credits allocated to it.

The state-run newspaper Iran wrote: “The money that could have been used to solve the problem of surface water disposal is as follows:”

“In 2005, the World Bank has provided a $149 million debt to repair the Ahwaz sewage network.”

“In 2015, the Supreme Water Council of the country, with the presence of Vice President Jahangiri, approved an 8,000 billion Toman (proposed by the provincial governor) for the management of wastewater in Khuzestan province and pledged to allocate the amount in 4 years.”

“Once again in 2017, the government agreed to allocate 9000 billion tomans in credit, apparently for one-third of which it was paid in 2017 (and officials say most of that money was spent in Abadan), but no further credit was available in the following years.”

“This money should have eliminated the problem of drainage and disposal of surface water in Ahvaz and even other cities in the province, but in fact, Ahvaz now has neither a surface water disposal system nor a reliable household waste disposal system. Anyway, now is the time to answer where these credits are. How are they spent? But if they are spent, why shouldn’t they?”

The inhumane conditions of the Ahvaz residents, who face deaths in the absence of the most urgent requirements for survival in the harsh winter cold, are now subject to all kinds of diseases and dangerous epidemics.

The Tabnak website, on 23 December, carried a report titled “Ahvaz Exposed to Outbreaks of Cholera and Leishmaniasis’. It revealed the painful conditions of the people of Khuzestan:

‘The city of Ahwaz is facing an environmental crisis following the overflow of sewage in the area and citizens are exposed to an epidemic of all kinds of diseases such as cholera and leishmaniasis. The current flooding is not like floodwater, and what has entered homes, schools, mosques, and organizations is full of the municipal, hospital and industrial wastewater, which is causing severe pollution problems. From Kianshahr to Kuy Alavi, 200,000 people have been affected by the flood disaster. The city’s streets should begin to cover with lime as quickly as possible, and if this is not done on time, we will face life-threatening problems for citizens.”

The state-run newspaper Hamdeli expressed fear and concern over the anger of the society and upcoming protests and wrote:

“The Khuzestan flood and sewage crisis is, in fact, a long-standing problem of inadequate macro-management and monitoring systems for resolving community problems, which unfortunately appear more in the suburbs and can only aggravate social crises and greater distances between the people and the government, and in fact, we are not only facing the dilemma of a flood crisis, but rather a flood of crises that, if we do not think about, can lead us to bigger crises.”

In the past few years, environmental crises and the government’s inefficiency in responding—or its role in intensifying them—have caused protests in various regions of Iran. From the mismanagement of water sources to air pollution, Iranians have poured into the streets to protest a government whose priority is anything but tending to the needs of its citizens. Will the floods in Khuzestan become another flashpoint between the Iranian people and their rulers?