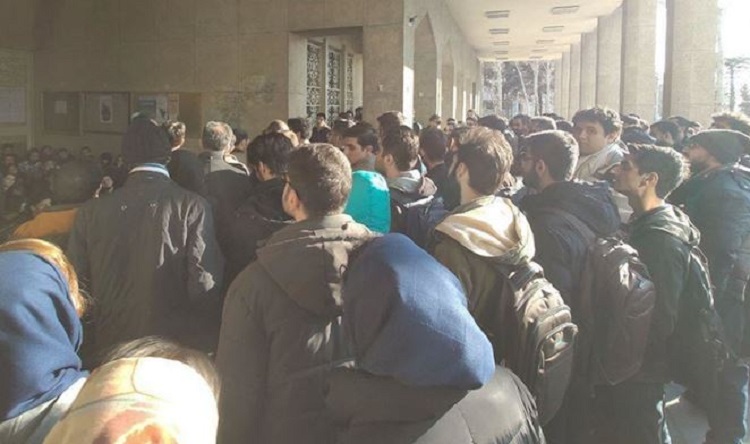 As expected, the Iranian uprising that sparked on November 15 is once again restored in the capital Tehran. However, this time it was ignited by the catastrophic crash of the Ukrainian civil airliner that left all 176 innocent passengers and crew dead.

In this respect, many college students in Tehran have held rallies to show their sympathy and solidarity with the victims’ families. Immediately, other segments of the society who were affected by the heartbreaking disaster joined students. A little later, when the public realized that authorities and the Revolutionary Guards (IRGC) are behind all crises in the country, they addressed them in their slogans saying: “IRGC! Shame on you! Let go of our country!”

Notably, protests were inflamed after the statement was issued by the regime’s Armed Forces Chief of Staff about the unintentional downing of the Ukrainian airliner on January 8. The IRGC and regime officials attempted to evade the consequences of this crime by denying any role. However, they were eventually compelled to admitting the truth. “In the first hours that I was informed [Wednesday morning], I informed my superiors,” said IRGC Aerospace Force chief Amir Ali Hajizadeh on January 11.

The fed-up people soon responded to Hajizadeh and his superior – the regime’s supreme leader Ali Khamenei – by pouring into the streets and changing: “Death to liars,” “Commander in Chief [Khamenei], Resign, Resign!” Meanwhile, the protests rapidly extended to other cities and universities across Iran, including Isfahan, Shiraz, Babol, Lahijan, Hamedan, Mashhad, Damghan, Rasht, Sanandaj, etc. Significantly, the demands and slogans were similar in all the above-mentioned cities.

From the earlier hours of the protests, students were focused on the main issue of the country, being nothing other than the mullahs’ dictatorship. In this context, they raised their voices against the root of Iran’s problems by chanting slogans, “Death to the dictator!”

It is worth noting that “Death to the dictator,” and “Death to [Ali] Khamenei” were the pivotal slogans during the November 2019 nationwide uprising. The common slogans and rapid expansion of protests have proven that such rallies in Iran are not scattered incidents and they are pursuing a specific intention. The young generation has not forgotten their friends who were murdered some months ago by security forces and they directly focus on the supreme leader as the main individual responsible for 40 years of corruption, bloodshed and plunging the country into horrible crises at the people’s expense.

Protesters showed they are looking for an opportunity to express their anger against the regime’s rulers. They are pursuing to take revenge on the mullahs for killing at least 1,500 demonstrators in more than 190 cities and towns across Iran. In this regard, they were chanting such slogans: “1,500 of our people were killed in [the] November,” “I’ll kill he who killed my brother,” and “My death brother, I’ll avenge your death.”

Major Attributes of the January Uprising

Everyone can easily grasp the main attributes of the January protests with a glance at the protesters’ slogans. The fact is that the demonstrators targeted the IRGC as the regime’s main means for both suppressions inside the country and exporting terrorism beyond. This is in addition to perpetual slogans against Khamenei.

Therefore, regardless of the authorities’ efforts to portray the IRGC as a “popular group,” vehemently supported by the mullahs’ apologists and lobbies in the West, ordinary people exhibited that they see this organization as the pillar of the regime’s oppressive and terrorist apparatus.

In this respect, protesters were shouting against the IRGC and demanding the elimination of this criminal establishment that simultaneously plunders and wastes national resources to fuel the regime’s extremist proxies and spreading the fear inside the country and beyond. “IRGC! Shame on you! Let go of our country,” “IRGC commits crimes and the leader [Khamenei] is supporting,” and “IRGC; Basij [paramilitary part of the IRGC], you are the ISIS [in Iran],” indicated the public wrath against Khamenei.

Protesters also debunked the regime’s propaganda about the death of Qassem Soleimani as merely a publicity stunt. During the past week, authorities have relentlessly made their efforts to style Soleimani as a “popular commander.” They mobilized their forces to hold unique ceremonies for the butcher of nations in Iran and the region.

In addition, officials distributed free foods between poor people in faraway counties, and forced government employees to attend processions held for “General Soleimani.” They also closed several schools and universities, as well as arrested and lashed youths who celebrated the killing of this international terrorist.

However, despite all these oppressive and deceptive measures, Iranian college students unveiled the truth and in parallel with tearing down Soleimani’s images. They were seen chanting, “Soleimani was a murderer, as so is his leader [Khamenei].”

In conclusion, the January protests well proved that the Iranian people intensively pursue freedom, justice, and equality. It also showed that the regime is not dealing with simply infrequent upheavals. There is a common desire for fundamental change in people from all classes of society.

In fact, repeated protests, which are uninterruptedly intensifying and expanding, are seriously terrifying authorities on one hand and herald other people that a bright future is within reach. Therefore, not only will the regime fail in quelling the people’s revolt, it is failing its potentials and broadening the rift between the mullahs and the Iranian society.

‘Death to the dictator’ chanted in central Iran city

Iran to send aid to Gaza via Egypt: report

AFP: Iran plans to send aid to the beleaguered...