Iran Focus: Tehran, May 08 – From the Grapevine … Authorities have removed books written by two senior dissident ayatollahs at the Tehran International Book Fair.

Officials say some 200,000 books have been put on display for the 10-day event, which opened to the public Wednesday at the Imam Khomeini Mosalla (Prayer Hall).

But the works of Grand Ayatollah Yousef Sanei were removed from stalls on the opening day.

Sanei, 73, is believed to oppose some of the hard-line policies of Supreme Leader Ayatollah Ali Khamenei. Following the Presidential election last summer, there were rumours that he issued a fatwa rejecting Mahmoud Ahmadinejad’s presidency.

Sanei has not held public office since retiring from the Guardians Council in 1983 but is a considerably influential figure since he is one of a few clerics to hold the title of Grand Ayatollah.

Books published by the late Grand Ayatollah Hossein Ali Montazeri have also been removed from the book fair.

Montazeri, who was Iran’s highest-ranking dissident ayatollah until his death in December, remained a controversial figure for most of the post-1979 revolution period. He was for several years the designated successor to Supreme Leader Ayatollah Khomeini, but was demoted in 1988 after he spoke out against the massacre of political prisoners in the summer of that year. He was placed under house arrest in the 90s for openly challenging the authority of current Supreme Leader Khamenei, and he issued a fatwa ordering Khamenei’s removal from power following the state-orchestrated crackdown on anti-government protests that swept the nation last year. Major anti-government rallies were held immediately after his death. 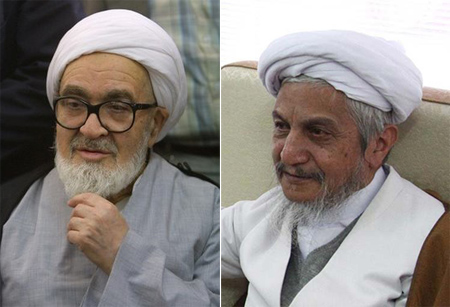 AFP: President Mahmoud Ahmadinejad said on Saturday that the...

Police presence beefed up in Tehran to counter protests

In Brief: Opposition to crackdown in Iran