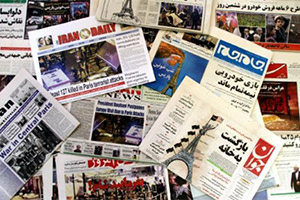 Iran Focus
Paris, Nov 16 – Following the catastrophic terrorist attacks in Paris on Friday, 13 November, the antihuman mullahs’ regime, known as the Godfather of international terrorism, has not been able cloak its jubilance over this crime against humanity and is despicably attempting to exploit this tragedy to legitimize the massacre of the Syrian people and the Assad dictatorship remaining in power that are the very main elements behind the emergence and expansion of ISIS, said National Council of Resistance of Iran (NCRI) in its website.

Hamid Abu Talebi, political advisor to Iran’s president Hassan Rouhani and the Tehran’s former ambassador to France, has described the terrorist crimes in Paris as “inevitable”, “the outcome of the West’s arbitrary measures in supporting terrorism … and neglecting Iran’s warnings during the past few years”.

“The French have paid the price of their government’s support for ISIS and terrorism”, said Brigadier General Massoud Jazayeri, deputy commander of Iran’s armed forces general staff. Describing the Syrian people’s resistance as terrorism he added, “From the first months of the terrorist measures in Syria and other neighboring countries, we gave numerous warnings to Europe that terrorism will engulf their lands”. This Revolutionary Guards (IRGC) general threatened Europe with more terrorist attacks and said, “If the West continues its support of terrorism… they will have to expect declaring emergency state in other parts of the European continent”. (IRGC-associated Fars news agency – November 14, 2015)

Tasnim, the news agency affiliated to the terrorist Quds Force, described the Paris tragedy as “homemade terrorism” in France and Europe and wrote, “Khamenei had during the past few years warned Western leaders that supporting terrorism in the region will eventually turn back on you… and in the not so distant future, these groups will cause turmoil in the same countries that supported them”. This news agency posted a despicable cartoon entitled “Homemade Terrorism”, depicting an image that the roots of ISIS are in the hands of France and its president.

Quds Online, affiliated to the IRGC, described the Syrian opposition as terrorist and wrote, “The U.S. and European countries support terrorists under the pretext of confronting Syria’s legal president, and they have allowed them to carry out crimes against humanity. The byproduct of such an approach is seen in the Paris terrorist attacks, and currently ISIS is like a dog that has bitten its owner’s leg, and the countries of Italy, United Kingdom and United States are threatened with similar attacks. If Western countries are seeking to prevent being engulfed in such human catastrophes, they must uproot terrorists without meddling in the internal affairs of other countries such as Syria. For this objective it is necessary for the West to leave the fate of Bashar Assad up to the Syrian people and focus their efforts on uprooting terrorism [resistance forces and the Free Syrian Army]”.

AFP: The US Congress could approve as early as...