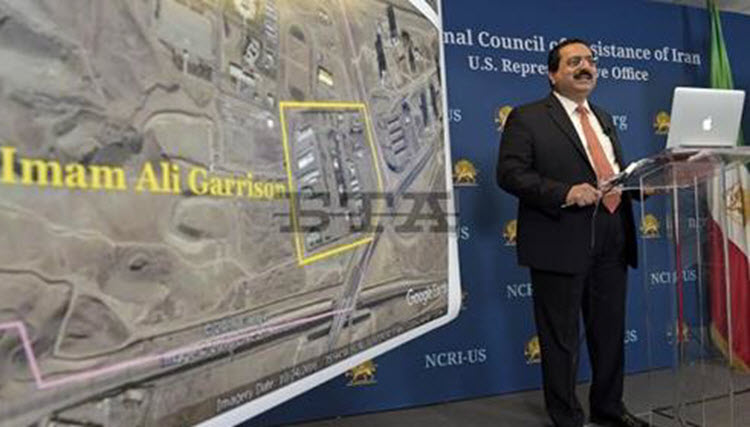 London, 21 Feb – The Iranian Resistance exposed the secret terrorist training camps that are operated within Iran by the Iranian Regime and their terror squad, the Revolutionary Guards (IRGC).

On February 14, the Deputy Director of the National Council of Resistance of Iran (NCRI) – US Representative Office, Alireza Jafarzadeh, held a press conference in Washington DC to reveal information about the terror training camps.

The camps were set up to train mercenaries to fight on behalf of Iran in the Syrian Civil War, to train terror proxies like Hezbollah before sending them to Iran and Lebanon and to train small terror cells in countries that Iran is not currently active in.

• 14 camps within Iran; eight within Tehran and one each at Mashhad, Gheshm, Amel, Semnan, Ahvaz, and Abadan

• Headquarters is Imam Ali military base

• Has approval of the supreme leader Ali Khamenei

The Iranian Resistance hopes that this further exposure of the Iranian Regime will lead to sanctions against the mullahs which will mean less money for the Regime’s terrorist activity.

The information was gathered by the People’s Mojahedin Organization of Iran (PMOI/MEK) who have been at the forefront of exposing the despotic Regime’s true colours:

• December 2016: Provided report on role of IRGC and its mercenaries in Syria (the number of troop under the Iranian banner were 25,000)

• April 2016: Revealed that the Iranian Regime was recruiting children to fight in Syria

• April 2015: Revealed that IRGC was training terror proxies, like the Houthis and Hezbollah, in foreign nations

That is not a comprehensive list but already it is clear that the MEK are a valuable source of information for democratic governments around the world, and as such, they are in constant danger from the Regime.

In 1988, 30,000 members of the MEK was slaughtered in mass executions across Iran over the course of just a few months. It was a deliberate attempt by the mullahs to eradicate the political group. Not one of those responsible for the mass murders has even faced justice.

In fact, the people responsible for the massacre are still in power in Iran, which means that MEK members are still in danger for their affiliation with the USA.

The terror training camp report was delivered to the US Defence Department by the Resistance forces for further investigation before the press conference.

AFP: Fresh international sanctions against Iran over its nuclear...