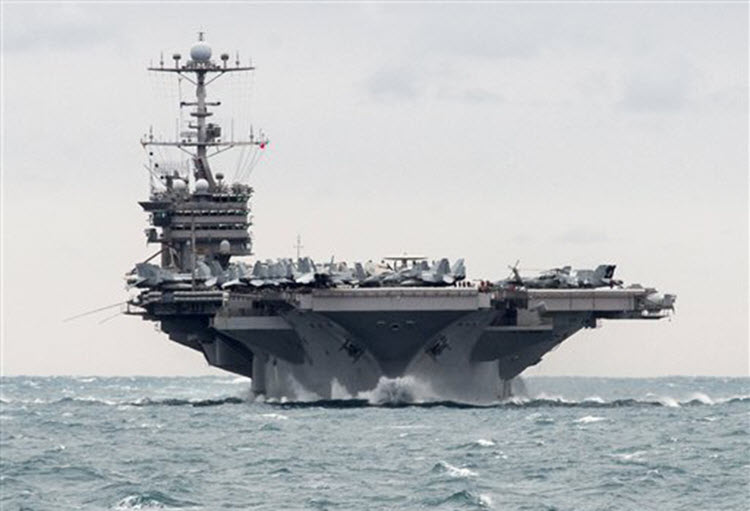 London, 26 Apr – A US destroyer was forced to alter its course in the Persian Gulf after it encountered a ship owned by the Iranian Revolutionary Guard Corps (IRGC) which was acting provocatively, on Monday.

Lt. Ian McConnaughey, a spokesman for the Bahrain-based 5th Fleet, said that the Iranian vessel had its weapons manned and came within approximately 1,000 yards of the USS Mahan.

The Mahan attempted to communicate with the Iranians but got no response.

in a statement to The Associated Press, McConnaughey said: “[The] Mahan made several attempts to contact the Iranian vessel by bridge-to-bridge radio, issuing warning messages and twice sounding the internationally recognised danger signal of five short blasts with the ship’s whistle.”

The Mahan then fired a warning flare, but the Iranian ship continued towards it, so the US ship had to move off-course for safety.

Another official said: “Coming inbound at a high rate of speed like that and manning weapons, despite clear warnings from the ship, is obviously provocative behaviour,”

Despite the provocation, the Mahan didn’t fire any warning shots.

This is just one of many instances where Iranian ships have harassed US ships in the Persian Gulf and the nearby Strait of Hormuz, a shipping lane through which nearly a third of all shipped oil passes.

In January, the Mahan fired warning shots at an Iranian ship which came with 900 yards of it. They had tried signalling to the Iranians to stay away, but that had no effect, so the crew fired three warning shots with a .50 calibre machine gun.

Pentagon spokesman Capt. Jeff Davis cited 35 incidents of unsafe or unprofessional behaviour by Iranian ships in 2016; most of which occurred in the first six months of the year.

One of the worst involved the capture of 10 US sailors who were held hostage by Iran and only released after the US paid over $1 billion in ransom.

Other notable incidents were:

• Late November: an Iranian boat in the Strait of Hormuz trained a machine gun on a U.S. Navy helicopter.

• September: Iran threatened to shoot down Navy aircraft it said was encroaching on its airspace

• Throughout 2016: U.S. warships have been targeted by rebels in Yemen who are being supplied and supported by Iran

According to McConnaughey, this latest report brings the number of incidents so far in 2017, up to seven.

Economy not for donkeys as crisis tops Iran voter concerns

Bloomberg: Decades after Ayatollah Ruhollah Khomeini dismissed it as...

Kerry says no to Iran’s help against Islamic group

AP: Even as it discouraged Iran from joining diplomatic...