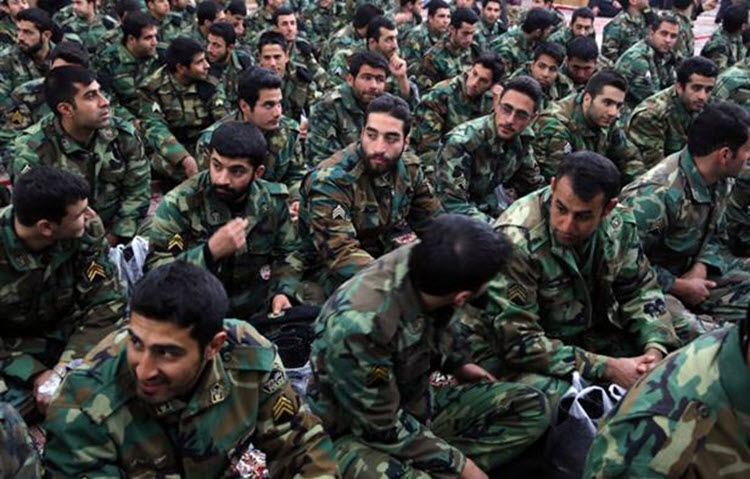 London, 30 May – It is an open secret that the Iranian Regime has placed tens of thousands of fighters inside Syria to fight on behalf of the Bashar Assad dictatorship, but Track Persia has compiled a comprehensive report on the troops, detailing where they come from and their roles in propping up the brutal Syrian government.

They write that there are between 1,500 and 3,000 Iranian Revolutionary Guard officers serving as advisors in Syria, but these are just the leaders. There are around 60,000 troops believed to be serving under them, including terrorist cells like Hezbollah and the Houthis, and even refugees who believe their families will be granted permanent asylum within Iran if they fight for the Regime.

Track Persia wrote: “All military units receive their orders from the Iranian Revolutionary Guards. Their salaries, equipment, and training are totally under Iranian supervision and control. They are coordinated by the Quds Division of the Revolutionary Guards, commanded by Qasem Soleimani, even though each division enjoys a relatively high degree of autonomy.”

There are five main national entities that work under the Iranian Regime’s command in Syria; the Lebanese Hezbollah, the Afghan Fatimiyoun and Khadem el-‘Aqila Brigades, the Pakistani Zainebiyoun Brigade, the Yemeni Houthis, and the Iraqi Shiite militias.

• Shows off old US equipment which was given to Lebanon

• Comprised of refugees; broke off from the Afghan refugee group in 2015 and are paid significantly more than Afghan soldiers

• 40,000 fighters; the largest of all groups fighting for the Regime in Syria

• Comprised of over 15 smaller militia groups

• Has its own weapons production factory

• Fought in Syria from Day 1

Track Persia notes that the Syrian Civil War has created complicated alliances and chaotic situations which have no historical comparison.

They wrote: “The only time a coalition of Arab forces fought other Arab forces was in the course of the Gulf war and the Yemeni conflict. Arab contingents were regular military formations, and the divide between them rested on differing national interests, whereas in the Syrian conflict, militias from almost every place in the world are fighting along and against militias and regular forces based solely on the Sunni-Shiite divide.”

They continue by pointing out that foreign powers, like the Iranian Regime, are manipulating the conflict to suit their own needs, never caring how this affects the people there.

They wrote: “Iran’s foreign legion, described above, is only the tip of the iceberg, but it is proof of that major development. Long time kept under the radar, this deployment of foreign troops would have stayed quiet were it not for the coffins coming back home. In a way, it stresses the fact that Iran remains reluctant to engage its main forces to protect Assad, and left without this choice, Iran had no other option, but to bring into the battlefield other Shiites ready to die for its cause. To paraphrase a very old saying, Iran is ready to fight in Syria until the last non-Iranian Shiite.”

World banks are warned against doing business with Iran

New York Sun: In a move that could cripple...

Reuters: Iran has launched a submarine production line to...