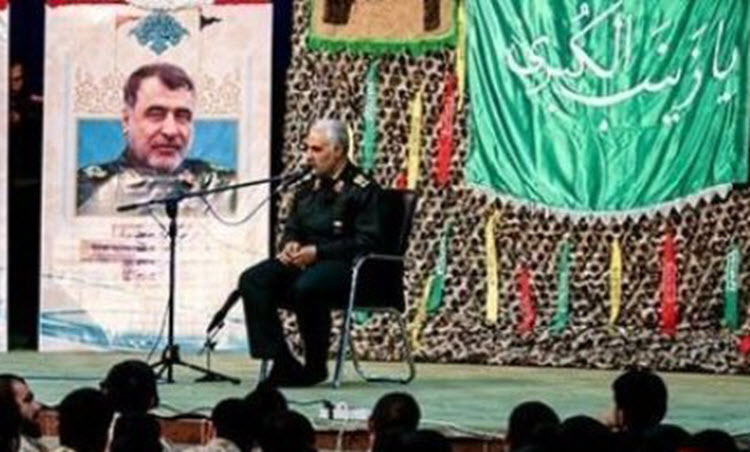 London, 26 Jul – A propaganda campaign is being run by the Islamic Republic of Iran and its Islamic Revolutionary Guards Corps (IRGC) to highjack the victory in Mosul and the broader war against the Islamic State as their own, in an attempt to play down the impact of the U.S. military support, which has been critical in the campaign.

The IRGC coordinated directly or indirectly with the U.S. during the war, but Iran continues to reject the presence of the U.S. in the Middle East.

Qods Force chief Qassem Soleimani in his address to the Revolutionary Guard’s Imam Hossein Guardianship Training and Officer University this week, once again peddled the conspiracy theory that the U.S. and Israel created the Islamic State and exacerbated the Iraqi and Syrian wars to “bring Iran to its knees” and “destroy the Islamic revolution.”

He said, “With the entrance of Iraq’s ulama and sources [of emulation, referring to senior clerics] and formation of hashd al shabi [Popular Mobilization Forces (PMF)], the power of the people’s religious and ideological power, DAESH [Islamic State] was stopped with the entrance of hashd al shabi into the Iraqi army, the Iraqi army was transformed into a Hezbollahi army, and was able to overcome the false takfiri beliefs and dislodge the unjustly-seated caliph from Mosul.”

Soleimani made a similar claim last week, saying that the Iraqi military is becoming more ideological, and in that same speech he also said the Iraqi army itself is becoming more ideological. In a likely reference to the armed forces as a whole, Soleimani recently spoke about the PMF, which is a multi-sectarian force whose key leaders are Guard-backed formations, as it’s been reported that Guard-backed militias have infiltrated Iraqi security services, and their formations have been legitimized as Iraqi government forces through the PMF.

In an article published by Track Persia, they write, “Soleimani is exaggerating the magnitude of the PMF’s contribution to the war against the Islamic State. It has played key roles in the war, though U.S.-trained Iraqi Army and Counter Terrorism Services (CTS) have borne the brunt of fighting.”

While the PMF did capture areas west of Mosul and blocked the Islamic State’ escape routes to Syria, the U.S.-trained Counter Terrorism Service (CTS) did the difficult work. Guard-backed forces have fought in Mosul, in particular, The Federal Police, allegedly infiltrated by the Badr Organization, participated in taking west Mosul.

Soleimani told his audience that Syria “is a bridge to the resistance front, whether in Lebanon or Palestine. Any rational person must understand that defeat in this war is considered a defeat for us, which thanks to God’s blessing the resistance front has won against the arrogant in these areas.” He credited Tehran’s “ideology and leadership” with leading to “truth of the Islamic revolution’s expansion inside and outside the borders,” which “friend and foe admit.”

Ali Fadavi, the Revolutionary Guard Navy Chief, said in another address, “the enemy faced defeat in Lebanon, Palestine, Iraq and Syria because these countries follow the inspiring model of the Islamic Revolution’s discourse.”

CNN: Attacks against U.S. troops in Iraq with bombs...