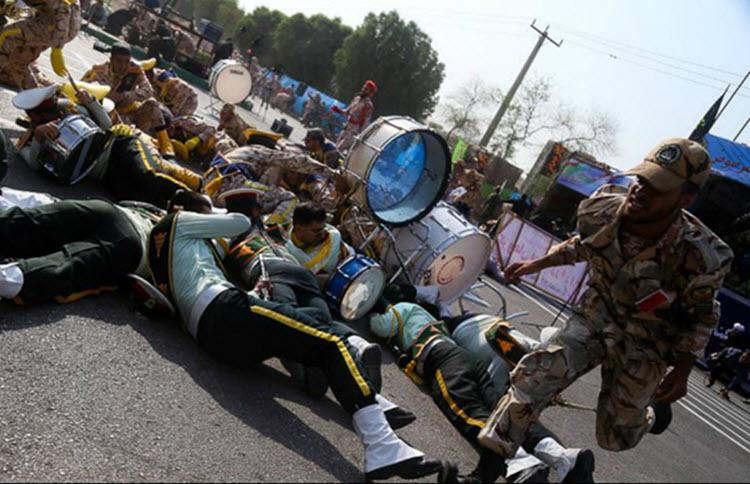 London, 25 Sep – On Saturday 22nd September, a military parade in Ahvaz in the south-western part of Iran was the target of an attack. There were dozens of people killed and scores more injured. A state news agency said that several civilians, including children, were killed, as well as 12 members of the elite Islamic Revolutionary Guard Corps (IRGC).

A local Arab separatist group claimed responsibility for the attack but Iranian officials have said that the United States, Saudi Arabia and the United Arab Emirates were behind the attack.

Iran threatened revenge on those it believes are responsible, escalating tensions between Iran and the Persian Gulf States and the U.S.

Just two days after the attack, Iran’s Supreme Leader Ayatollah Ali Khamenei said: “This cowardly act was carried out by those who are rescued by Americans wherever they are entangled in Syria and Iraq and their hands are in the Saudi and Emirati pockets.”

Hossein Salami, deputy commander of the IRGC, said at the funeral of some of the victims: “You have seen our revenge before. You will see that our response will be crushing and devastating, and you will regret what you have done.”

U.S. Defense Secretary Jim Mattis said that Iran’s threats are “ludicrous”. Once again, the Iranian regime throws around accusations and threats without having a single shred of evidence to back up what it is saying.

Mattis said: “We’ve been very clear that they shouldn’t take us on like that. And I am hopeful that cooler, wiser heads will prevail. They’ve so far blamed at least three countries and I think one terrorist group. We’ll see how long the list goes. But it’d be good if they knew what they’re talking about before they started talking.”

According to a report by Fars – a semi-official news agency with links to the IRGC in the country – a video threatening the United Arab Emirate and Saudi Arabia with missile attacks on their capital cities had been published. The video was posted on Tuesday on Twitter but was then deleted. Israel was also threatened in the clip.

This is typical behaviour of Iran. It always seeks to enflame situations and throw around accusations. The United States, Israel and Saudi Arabia are normally blamed.

The Iranian president, Hassan Rouhani, and his foreign minister, Mohammad Javad Zarif, will be attending the United Nations General Assembly in New York. It was previously seen as a potential opportunity for U.S. President Donald Trump and Rouhani to meet, but it is unlikely that this will happen given the events of the weekend and the ensuing threats from Iran.

The Trump administration has already re-imposed the first round of economic sanctions and the second round affecting its oil industry and banking transactions will take effect at the beginning of November. National Security Adviser John Bolton has also warned that more sanctions will be created if Iran does not change its policies.