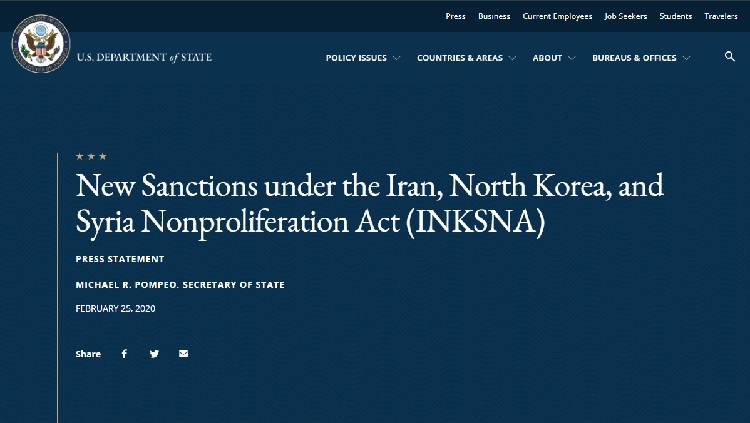 The United States imposed new sanctions on 13 people and entities in China, Iraq, Russia, and Turkey over their support of Iran’s missile program.

The State Department said Tuesday: “The imposition of these measures underscores that Iran’s missile program remains a significant proliferation concern.”

They continued by saying that these two-year discretionary sanctions are “consistent with our efforts to use all available measures to prevent Iran from advancing its missile capabilities”.

Those sanctioned, including Chinese and Turkish export and trading companies, are accused of violating the 2000 Iran, North Korea and Syria Nonproliferation Act (INKSNA).

The State Department said that Luo Dingwen, a Chinese individual named in the sanctions has also been providing Pakistan’s missile program with sensitive items.

Here is the list of all those sanctioned who were named in the statement:

None of the other eight has been named at this point, but other sources are reporting that the list includes three more Chinese companies, another Chinese person, one Iraq company, and three Russian firms, including a leading Russian military design outfit.

US Secretary of State Mike Pompeo said: “The recent determinations were the result of a periodic review of sanctionable activity as required by INKSNA… The sanctions include restrictions on US government procurement, US government assistance, and exports.”

In January, following missile attacks on US forces in Iraq, the US imposed sanctions on eight senior Iranian officials responsible for domestic and international crimes against humanity.

Pompeo said: “We’re striking at the heart of the Islamic Republic’s inner security apparatus. These sanctions targets include the secretary of the Supreme National Council and the commander of the Basij forces.”

The Us placed further sanctions on the Iranian government’s manufacturing, mining and textile sectors in order to cut off the money that Iran uses for such attacks. Therefore, the US began placing sanctions on Iran in May 2018, shortly after Donald Trump pulled out of the 2015 nuclear deal citing the regime’s non-compliance with the agreement. The deal is known formally as the Joint Comprehensive Plan of Action.