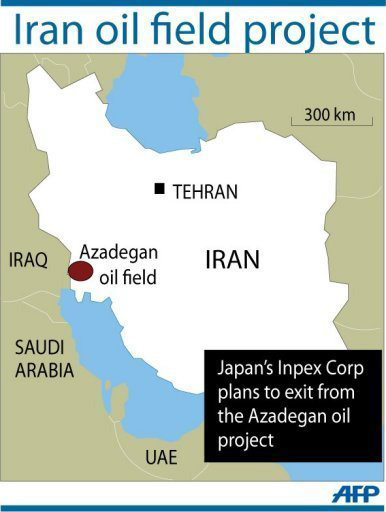 State Department spokesman P.J. Crowley said the U.S. “welcomes the decision,” adding that the move sends “a powerful and united signal to Iran that it should meet its international obligations and begin to engage seriously on its nuclear program.”

After Japan tightened its sanctions against Iran on Sept. 3, to align itself with the U.S. and European countries, Inpex has been the center of attention regarding a possible pullout from the massive oil project.

Inpex didn’t mention a specific reason behind its decision, nor did it name its expected withdrawal date. A spokesman said under the agreement Inpex will hand over its 10% stake in Azadegan to NIOC. The Japanese company won’t be required to pay any compensation to NIOC for exiting, he added, but declined to give further details. The move isn’t expected to have a material effect on its results.

Inpex lowered its stake in Azadegan to 10% from 75% in 2006, ceding its role as operator to NIOC amid tension between the U.S. and Iran over the country’s uranium processing and nuclear-power development.

Some media reports at the time said that the Japanese government had responded to U.S. pressure by convincing Inpex to reduce its role in Iran. Development work at the field has been virtually nonexistent since then.

This week, 140 US lawmakers joined in sending a...