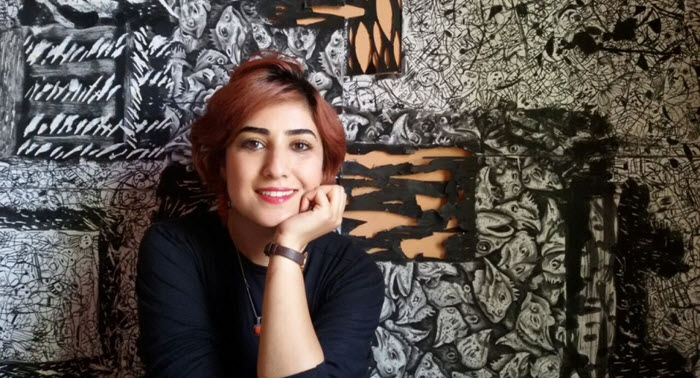 Washington, 17 Jul – Atena Farghadani drew a cartoon mocking Iran’s parliament in protest of her country’s anti-birth control policies. For this, she was arrested by the Revolutionary Guard in the summer of 2014.

In her July 15 interview with Michael Cavna of the Washington Post, after she was released from prison, the Iranian artist says: “I’m stuck in a limbo.” referring to the mental weariness and the physical problems caused by her imprisonment. “At the moment,” she continues, “since I’ve arrived at the certainty that there is miracle lying in the art of drawing and painting, I’m more determined to continue doing it than ever.”

Atena is an inspiration to many. Her creative and political resistance has influenced the community of artists and their supporters around the world. Paintings, drawings and cartoons have flooded in from her fellow artists for the #Draw4Atena call to arms.

While imprisoned at in the gruesome Gharchak prison she went on a hunger strike. She says, “What bothered me the most was to see inmates — many of whom were victims of the economic and cultural poverty in the Iranian system — who were not treated like human beings; their most basic rights were violated. I consider Gharchak prison as a graveyard of time …”

She was eventually moved to Evin prison, and as a result of the efforts of her family and her attorney, as well as pressures from the international community and human rights organizations, her sentence was reduced from 12 years and nine months to 18 months, and a three-year suspended sentence.

“I am grateful to all those whom I don’t know, and to whom I owe my freedom.” Aetna says, but adds that she will continue painting, and plans to make a collection that addresses political and social issues.

“I intend to have an exhibition within a year, but I’m afraid I can’t hold this exhibition in Iran, and thus I’m even thinking of having a street gallery, though it wouldn’t be without consequences. I believe that “criticism” serves art. So, I have decided to use my art to challenge social issues.”

When asked if she would consider relocating to another country, she answered, “When I witness the problems Iranians are dealing with, such as economic and cultural poverty and various limitations, I cannot leave them alone to live in another country in a better situation..” adding, “as long as I live, I will stay here, even if I have to go to prison again.”

Reuters: Ten people were killed and dozens injured in...