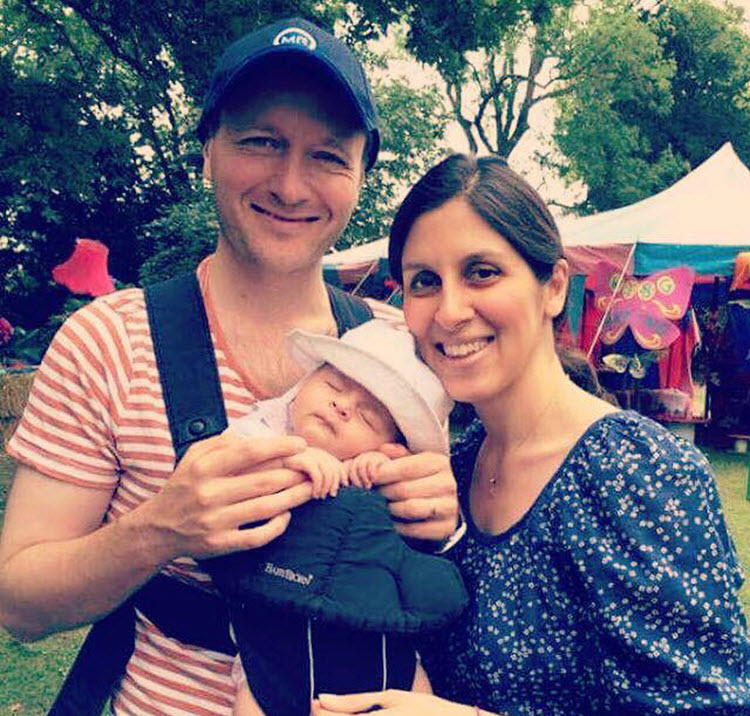 London, 21 Aug – The British charity worker, who was arrested while visiting her parents in Iran earlier this year, was brought before a secret court last week.

Nazanin Radcliffe was recently sent to trial by the Iranian Revolutionary Guard Corps (IRGC) but still no formal charges have been brought.

Her husband, Richard Radcliffe, released an update about the #FreeNazanin case on the Change.Org petition on August 20th.

This was a bold move by Mr. Radcliffe as the IRGC has made thinly veiled threats against his wife in response to his previous allegations.

Mr. Radcliffe said: “I was quiet for over a month, while Nazanin was kept in such cruelty. I will be quiet again when Nazanin and Gabriella are back home. Not before.”

Nazanin sat before Judge Salavati in the Revolutionary Court, facing 10 years in prison for espionage; an allegation that she, the charity she works for and her family have repeatedly denied.

The IRGC are trying to paint the Thomson Reuters Foundation as an ‘infiltration project’ directed by Western intelligence services, rather than as a charity dedicated to “socio-economic progress and the rule of law worldwide”.

Mr. Radcliffe said: “For the Revolutionary Court, you defend yourself against suspicions. Formal charges appear only at the end. As an outsider, it can seem upside down, even retrofit – it risks making the crime fit the punishment.”

The trial lasted three hours and her parents and the UK lawyer her husband attained were banned from attending.

Nazanin’s interrogators, who were “angered by a miscommunication” insisted that Mr. Radcliffe “clarify” some previous statements he had made publically.

Mr. Radcliffe said: “They wanted her/me to clarify: it is not their mandate to negotiate deals with other governments which are handled by the Iranian government; the Revolutionary Guard’s authority is for investigations. Their actions have only ever been to call for better cooperation between Iran and the UK.”

His statements had so angered the IRGC that when Nazanin’s father and daughter were allowed to visit- the IRGC stopped her mother outside the prison. Then the pair were “marched through the corridors with a sack over their heads”- the standard issue silencer for the Revolutionary Guard.

Nazanin expressed thanks to her captors for their ‘kindness’ in allowing her to see her daughter and phone her husband but it’s not hard to imagine that she was pressured to do so, especially as other prisoners’ family members have come forward about IRGC threats of relatives being arrested and children being in ‘road accidents’.

Judge Salavati apparently considers it suspicious that Nazanin’s story has attracted so much media coverage. The truth is that Nazanin has attracted around 100 pieces of media coverage in the nearly five months since she was arrested but the reason is that the British people do not take kindly to the kidnapping of charity workers and their children.

Mr. Radcliffe discussed why he wanted to keep Nazanin in the public eye including documenting the regime’s lies and U-turns.

Radcliffe said: “But mostly, I speak because you are watching. Right now, your watching is what keeps Nazanin safe. Because you can see the sound and fury around her for what it is, you see the Guards for what they are.”

Iran-IAEA nuclear agreement ‘not sufficient’: US

AFP: The White House judged "encouraging" but "not sufficient"...