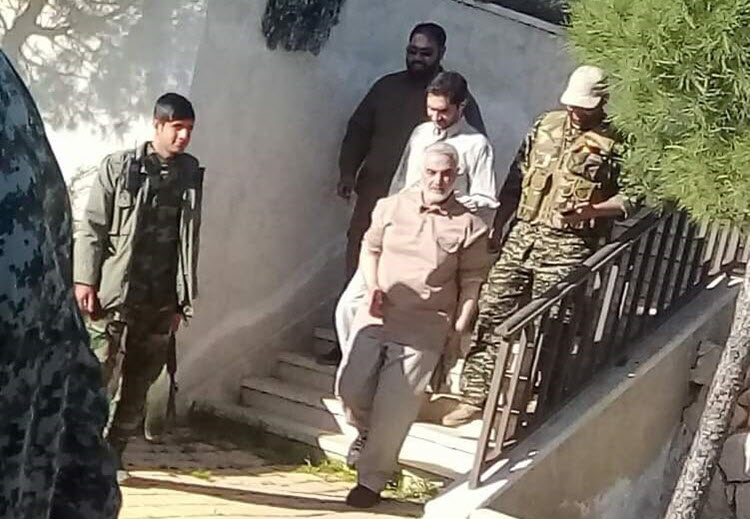 The photo, which can be seen on Long War Journal, apparently shows Major General Qassem Soleimani in the Hama province of Syria.

Local media reports state the Assad Regime, which is heavily bolstered by the Iranian Regime and the IRGC, is trying to retake areas in northern Hama, which were recently lost to the Syrian opposition.

The sources reported that Soleimani met with the chief of the Assad-loyalist Tiger Forces, who were dispatched to Hama to counter the opposition forces, and that this picture was taken afterwards.

The Tiger Forces who are working with the National Defence Forces and other pro-Assad militias in northern Hama are backed by Russian airpower and pro-Regime forces including the IRGC and Harakat al Nujaba (an Iranian-controlled Iraqi militia).

The IRGC have also announced five fatalities over the past week; at least two members of the IRGC Basij paramilitary in Hama, and three more Guard members, including a brigadier general second class.

The Syrian opposition forces are made up of a number of jihadist, Islamist and Free Syrian Army-branded groups, with Al Qaeda’s joint venture, Hay’at Tahrir al Sham, playing a significant role.

Toumaj wrote: “The Iranian fatalities highlight the regular IRGC forces’ continued involvement in the Syrian war. Reporting directly to Supreme Leader Ali Khamenei, Soleimani has executed Iranian strategy in Syria since the popular uprisings in 2011, and has significant influence in shaping the pro-regime military campaign.”

Iran has only ever claimed to be in Syria to protect religious shrines, but the bodies of their troops are often found on the battlefield far from those shrines.

The insurgent recent capture of land, highlights how vulnerable the Syrian Regime is and even though, they may be taking back small pockets of land, they are far from victorious. However, the end of the Mosul campaign (fighting ISIS) could free more Iraqi militiamen to fight in Syria under the control of Iran.

Toumaj wrote: “Soleimani and the senior leadership in Tehran are committed to continuing their military campaign in Syria. They consider it an existential war that directly threatens regime survival. As the American-backed Syrian Democratic Forces appear poised to siege and retake the Islamic State stronghold of Raqqa in eastern Syria, Tehran hopes further military gains would help secure its core interests in future political negotiations over the country’s fate.”

Iran Focus: Reza Shahabi, a member of the Board...

Iran must move if talks with EU to resume: Germany