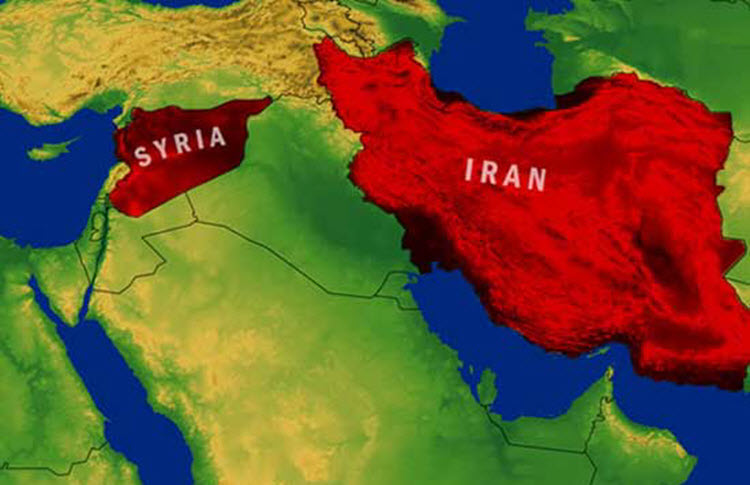 London, 27 April – A recent report published by the International Monetary Fund shows that the economy in Iran dwindled last year following sanctions that were leveled by the US. As well, it is expected to decrease by another 3.6 percent or more this year. Iran’s oil exports have declined by more than half, and the rial, its currency, continues to decline in value. The recent flooding has also added to the economic crisis. Now, with the new sanctions leveled at the Iranian government’s military institution — the Islamic Revolutionary Guard Corps (IRGC) and its affiliates — an even more significant pressure will be put on the Islamic Republic.

Now, Iran’s leaders are feeling the negative impact of their investments in other countries, specifically Syria. Economic interference was one of the most important tools that Iran utilized to make profits, control the Arab state, and help keep President Bashar Assad in power.

Before the conflict in Syria erupted, the two countries played almost equal roles in bilateral economic trade, business dealings and investments. Since then, Tehran provided financial assistance and made significant investments across the country. By doing this, Iran gained economic leverage over Damascus as Syria’s dependence on Iran increased.

Dr. Majid Rafizadeh, the Harvard-educated Iranian-American political scientist, and president of the International American Council explains the situation by using this example, “A few months after the conflict began, the Iranian authorities signed a $10 billion agreement with Syria and Iraq for the construction of a natural gas pipeline that would start in Iran, run through Syria, Lebanon and the Mediterranean, and reach several Western countries.” Dr. Rafizadeh adds that, “Tehran also opened a credit line for Syria and invested a considerable amount of resources, skilled forces and labor in Damascus. Iranian Supreme Leader Ali Khamenei supported the allocation of billions of dollars in aid to Syria, including $5.8 billion that was provided by Iran’s Center for Strategic Research, which concentrates on Tehran’s strategies in six areas, including foreign policy research, Middle East and Gulf research, and international political economy research. Tehran also began establishing military bases across Syria, while Iranian authorities and Assad made plans for more comprehensive agreements that sought to establish a regional economic bloc.”

As part of the reconstruction process, Iran increased its investments in Syria’s infrastructure, power generation capabilities, and its gas market. However, Iran is struggling to maintain its business dealings in Syria. In fact, on April 16th, Syrian newspaper Al-Watan revealed, in an unprecedented move, that Tehran had halted its credit line to Damascus. Al-Watan has also reported that Tehran has been unable to ship oil to Syria, causing significant fuel shortages. These disclosures, made by a Syrian newspaper, so soon after a visit by Iran’s Foreign Minister Mohammad Javad Zarif, who met with Syrian President Bashar al-Assad in Damascus, indicate that Damascus probably failed to gain an extended credit line from Tehran.

According to Dr. Rafizadeh, the lifting of crippling sanctions by the Iran nuclear deal was one of the reasons why Tehran could previously afford to offer billions of dollars of credit, free oil exports, and investments in Syria. The re-imposition of sanctions, along with the recent designation of the IRGC as a terrorist group by the US greatly impacts the relationship between the two countries. The importance of the military cooperation between the two nations must be stressed — Khamenei and the senior cadre of the IRGC need to strengthen Syria’s defense systems because the survival of the Assad regime is considered a matter of national security for Iran. So, with Tehran’s investment in Syria now at risk, this situation puts major pressure on Iran.

The Times: A senior Iranian employee of the British...

AFP: The bodies of six Indian divers working on...