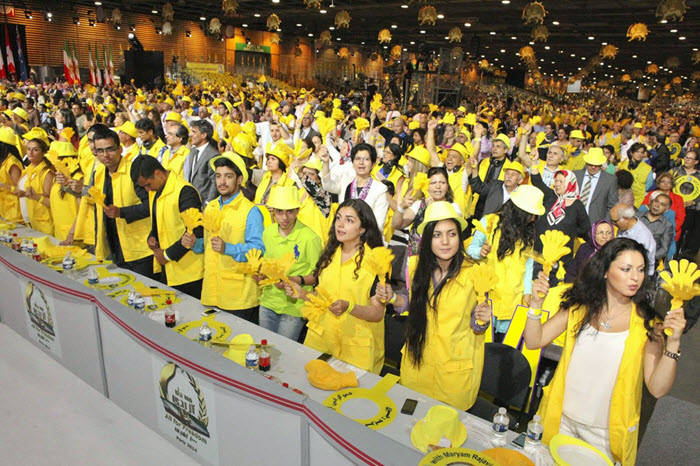 Iran Focus
London, 6 Jul – Following the rocket attacks on Monday on a group of Iranian dissidents in Camp Liberty, Iraq, their press spokesman has written a piece for The Hill decrying the so-called moderate Iranian regime.
Shahriar Kia, who is also a spokesman for Iranian opposition group, the People’s Mujahedin Organization of Iran (PMOI), urged the US Congress to put forward a bipartisan message that Iran must improve its human rights record and end its support for terrorism if they want to continue their relationship with the global community.

This would be similar to the statement signed by 270 Members of the European Parliament, which condemned Iran’s blatant and systemic human rights abuses and called on Western governments, including the EU, to condition further relations with Iran with progress on human rights and an end to executions.
Iran has increasingly cracked down on freedom of expression for its press and its citizens, continued nuclear missile tests in spite of UN resolutions, and oppressed religious and ethnic minorities like the Kurds, Arabs, Baluchis, and Sunnis.

Kia cited some sobering facts on executions in Iran from Amnesty International’s latest report on the death penalty. Iran not only continues to execute juveniles but they have the highest number of executions per capita. The UN Special Rapporteur on Human Rights in Iran, Ahmad Shaheed, announced that Iran executed nearly 1,000 people in 2015 alone; the highest in the past 27 years.

The mullah’s regime has been identified as the world’s leading sponsor of international terrorism by the U.S. State Department, yet, last year, during the Iran nuclear deal, the USA referred to Hassan Rouhani’s regime as ‘moderate’. Barack Obama and Secretary of State, John Kerry, have said that there is no doubt the relief money Iran receives from Western governments will fund terrorist activity.

Their interference in the Syrian civil war to prop up the Bashar al-Assad regime has only prolonged the struggle of the Syrian resistance, prevented them from defending Iran against ISIS and killed Afghan refugees who Iran enlisted to fight for Assad.

Kia said: “Iraq is yet another canvas where Iran’s fingerprints are witnessed ever more as the international community continues to, unfortunately, neglect this very dangerous flashpoint corner of the globe. Iran-crafted and sponsored Shiite militia groups are once again accused by international human rights organizations of pursuing systematic and sectarian killings and human rights violations targeting the minority Sunni community in the recent campaign to retake the city of Fallujah, west of Baghdad, from Islamic State. This ultimately further marginalizes and alienates the Sunnis, and further pushes them into adopting extremist methods and welcoming radical groups.”

Members of the Iranian resistance, including the PMOI and Maryam Rajavi, leader of the National Council of Resistance of Iran, will gather for a rally in Paris on July, 9. There, they will call on politicians from around the word to recognise the plight of the Iranian people and demand an end to executions and torture in the state.

E.U. responds to Iran about talks on nuclear program