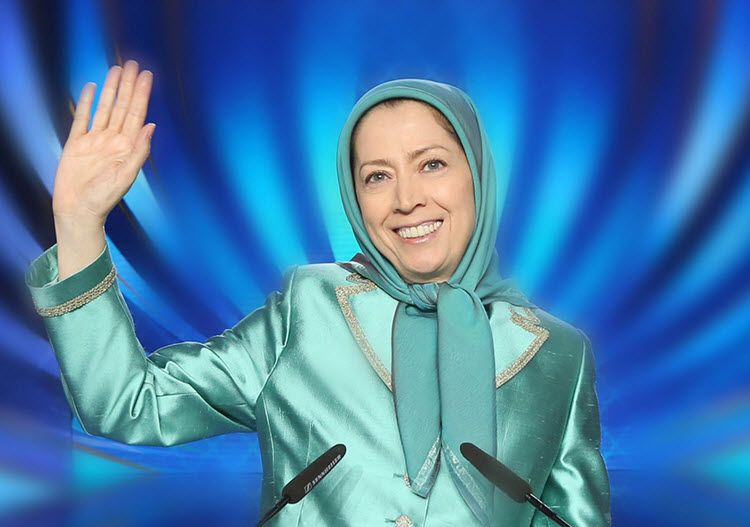 Paris, 9 Jul – “One year after the nuclear agreement,” says the Iranian mullahs’ most powerful adversary in Paris, “Iranian regime is more than ever on the verge of being overthrown.”

President-elect of the National Council of Resistance of Iran, Maryam Rajavi, spoke today at a large gathering of tens of thousands of Iranians gathered in Bourget, France. Iranian dissidents come to Paris every year to show support for the NCRI and its president Mrs. Maryam Rajavi. NCRI aims to replace the Iranian theocratic regime with a democratic government.

Mrs. Rajavi expressed dismay of policies of rapproachment towards the regime by western governments and condemn policies of silence vis-à-vis “the Iranian regime’s meddling” in the Middle East region which will allow the mullahs to further “commit genocide and to infringe upon the national sovereignty of countries.”

Mrs. Rajavi also stressed on the right of the people of Iran to oppose and overthrow the regime ruling in that country and attain freedom and democracy. Such development will “not only benefit the people of Iran but is indispensable to peace and tranquility in the region and the world,” added Mrs. Rajavi.

On the subject of anniversary of Iran’s nuclear agreement with the west, Mrs. Rajavi commented that both factions of the Iranian regime “have failed to save the Iranian regime,” and its “crises have overflown,” and the government of mullahs “has plunged deeper in the swamp of war in Syria, and is more than ever in danger of collapse.”

Explaining why the Iranian regime gave in to the nuclear deal, Mrs. Rajavi speculated that Khamanei, Iranian regime’s supreme leader, must have realized that his regime was in Peril. And, “to save it, he ultimately retreated and temporarily abandoned the nuclear weapons program,” said Rajavi. But the crisis engulfing the regime “could not be contained,” and to the contrary, “it was exacerbated and plunged the regime into the quagmire of the Syrian war.”

Rajavi pointed out that the funds pouring in after the sanctions were lifted following the deal have been spent on Syrian war. And Iran’s economy has further “plunged into recession more than ever.”

Mrs. Rajavi argued that the U.S. policy on Iran and the Middle East, “has jumped from one mistake into the next, from the notion of empowering bogus moderates to blacklisting the PMOI,” and when it remained silent vis-à-vis the 2009 uprising in Iran. “This policy has brought calamity to our nation and crisis to America,” said Mrs. Rajavi.

“We offer a solution that is the only effective option, and the most indispensable and attainable solution,” is to recognize the “right of the Iranian people to overthrow the religious dictatorship and attain freedom and democracy.” She suggested that the solution will benefit the Iranian people as well as amounting to a breakthrough for the region and for the world.

A ‘head case’ in Teheran

Daily Telegraph: The prospects for European Union mediation over...