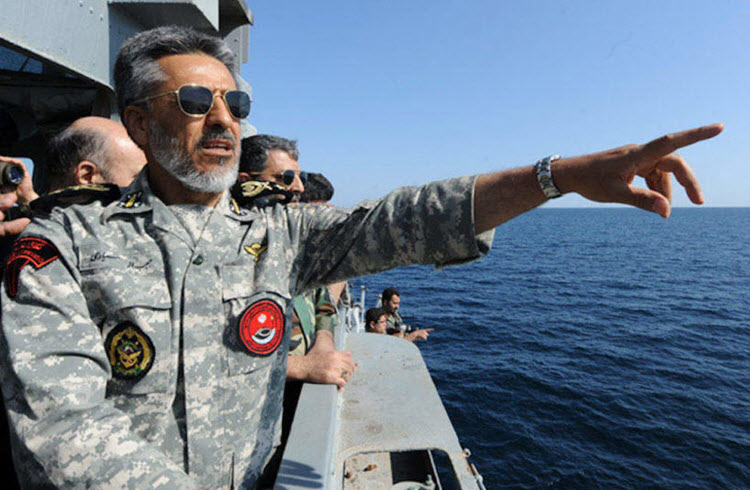 London, 31 Mar – While Iran calls for the destruction of Israel, according to some experts, an American or Israeli attack against the Islamic Republic’s nuclear and military sites would be fairly easy to execute. This is because, although Iran points to technological advancement in their military, it is actually has overextended itself in Syria.

A report published in March by the Middle East Media Research Institute (MEMRI), noted Iran has backed off their provocations against U.S. Navy vessels, and has even ceased their threats to sink these ships in the Persian Gulf. The report continued, “The slogan ‘death to America’ has disappeared almost entirely from the official discourse of regime spokesmen, including Iranian Supreme Leader Ali Khamenei himself, as have public burnings of the American flag.”

Fars News Agency reported on March 26, that deputy chief of staff of Iran’s armed forces, Brigadier General Masoud Jazayeri, warned the U.S. to be more careful about its warship movements in the Persian Gulf, which is a softer warning than we’ve heard in the past from Iranian leaders.

President and founder of MEMRI, Yigal Carmon, has stated that Iran’s claims of domestic development of military technologies are “complete nonsense,” but said that the country’s acquisition of North Korean missiles is concerning. Carmon said further, that Iran imports North Korean missiles and renames them to give the impression that they were domestically developed.

He explained that Iranian media publishes stories every few weeks about success of their military programs. One such story in January 2013, announced that Iran’s Space Agency had sent a monkey into space, yet pictures of the monkey before and after the “mission” failed to match up. “Iran does not create any quality military equipment, they only are able to buy from abroad. What do they invent to counter U.S. ships? All they are able to come up with is suicide speed boats,” he said.

Iran has also “displayed what they claimed to be domestically built submarines, but when we saw the picture that they put out, we saw that the size would be good for the Baltimore aquarium,” said Carmon.

The ballistics test Iran conducted in January failed. Carmon believes that Iran poses no real challenge to the U.S. “If the U.S. or Israel attack Iran’s nuclear sites and military targets, it will be a done deal,” he said.

A comparison of American and Iranian financial resources may bolster this argument. Fox News columnist Jonathan Adelman, an international studies professor at the University of Denver, wrote in February, “Look at the figures. The American GDP of over $18 trillion is more than 40 times the GDP of Iran ($450 billion)…. Given all this, the fear of Iran getting nuclear weapons still remains real. But, even more real is the notion that the biggest power in the world, plus three significant regional powers (Israel, Egypt and Saudi Arabia), could handle Iran if they would put their minds to it.”

Iran sank $6 billion annually of its resources into the Syrian Civil War, according to Bloomberg News.

Dr. Harold Rhode, a distinguished senior fellow at the Gatestone Institute, and a former U.S. Defense Department official, has stated that while America is strong both militarily and internally, Iran and North Korea “appear strong, but are weak and rotten inside.” Rhode said that while Iran is trying to develop nuclear weapons, it is destroying its country by inaction on domestic problems such as its water crisis. London-based NGO Small Media published a study in March 2016, saying that Iran “faces an unprecedented crisis of water resources that threatens to render vast swathes of the country near-uninhabitable within the coming decades.”

A dangerous opium drug problem is also facing Iran. Rhode speculated that Iranian authorities could crack down on drugs, but ignore it instead, in order “to keep the people preoccupied so they don’t concern themselves with overthrowing the government.”

Rhode believes the American or Israeli approach should be one of strength, but said, “Do we need to have a massive invasion [of Iran]? No. We must show that this regime cannot do what is necessary to keep themselves in power.”

There are alternatives to “actual physical attacks,” such as electronic warfare, when it comes to confronting Iran, according to MEMRI’s Carmon.

Rhode said other options should be considered before putting troops on the ground, including bringing about regime change. “We live in very stable societies, we expect changes to come slowly, but that is not how it works in totalitarian societies like Iran. The moment the people see the regime has lost its ability and willingness to keep itself in power, the regime will topple very quickly, as happened to the shah in 1979. The shah was not willing to do what was necessary to put down the rioting,” he said, and called Iran a “potentially a paper tiger” adding that it is “our job to encourage regime change—and we can.”

AFP: Iran said on Tuesday it will soon host...