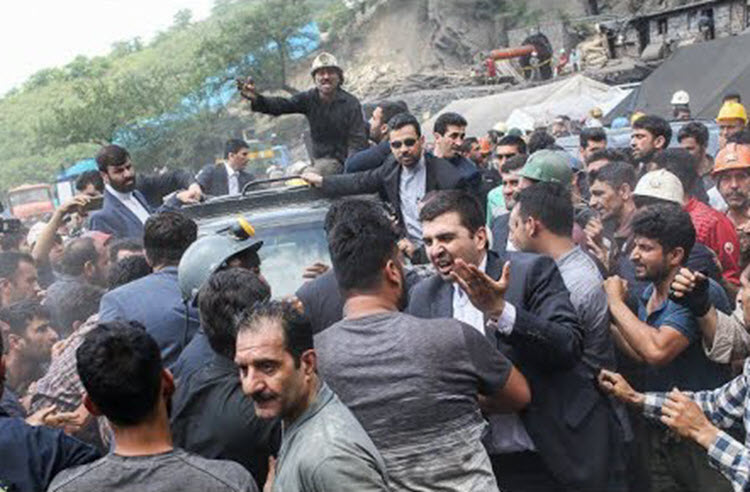 London, 8 May – Angry families and colleagues of those who lost their lives in the recent mine explosion in Golestan Province, Iran, attacked President Rouhani’s car and clashed with the Iranian Regime’s anti-riot police on Sunday, May, 7.

This protest was held five days after the tragic accident which killed dozens of mineworkers to coincide with Rouhani’s theatrical visit to the city.

The protesters demonstrated their wrath towards the Regime by hurling sticks and stones at Rouhani’s car; angry at the officials who are unconcerned with the deaths of their people, except in the run-up to the elections.

A sibling to one of the fallen mineworkers said: “Where was he a few days ago? Has he come to collect votes for himself? I want my brother back.”

While a mineworker addressed Rouhani over the shocking violations that were commonplace in their work, including the withholding of wages, unsafe conditions, and violence as a result of raising a complaint.

He said: “40 mine workers died [on Tuesday]. 170 children became orphans. 40 women were widowed. A few years ago, when I filed a complaint in Azadshahr’s court, they beat me up… Last year, we went to the Governor’s Office along with our wives to say that we have not received our wages for 14 months. We wanted to receive what was our right. You mean, you, the President, were not aware (of this situation)?”

He continued: “The company owes me 20 million humans, but I don’t have even 10,000 humans to take my child to the doctor… A worker works in the mine for 20 to 25 years and gets retired after 25 years, but his retirement salary is only 1.4 million humans… President, do you know what a mine worker is? We work one year and they give us insurance for only six months and the type of insurance is for barbers and librarians, not for harmful jobs.”

Another miner said: “Our monthly salaries equal the price of a minister’s snack and we are expelled from work if we protest.”

The protesters have been holding a vigil outside the mine’s entrance since the explosion and the anti-riot police were supposed to move them on before Rouhani arrived.

The mine’s main shareholder is the Bassij, associated with the Revolutionary Guards Corps (IRGC), which is itself a part of the Regime.

They have remained silent on the mine explosion in order to cover up its own safety failings; for instance, there are reportedly no ventilation devices in the mine, even at a depth of 1,700 metres.

The Regime’s Labor Minister Rabii, and the Minister of Industries and Mines, Nematzadeh, have also attempted to cover up the reasons for the explosion.