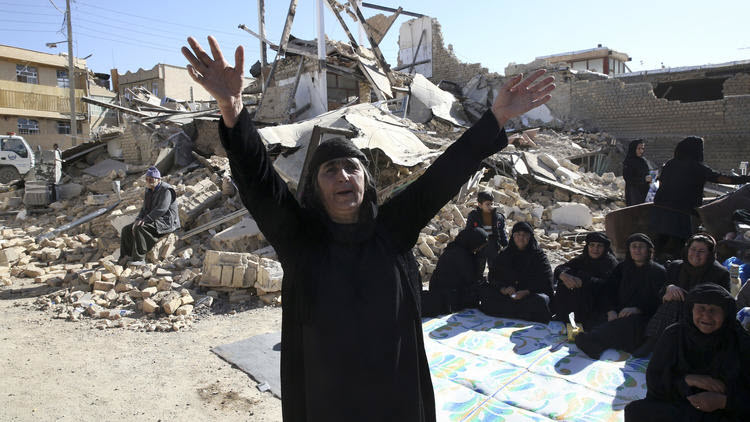 London, 15 Nov – Following Sunday’s earthquake that killed over 530 people, Iranian President Hassan Rouhani promised to launch an investigation into why housing built by the Regime under former President Mahmoud Ahmadinejad collapsed while privately built homes were able to withstand the 7.3 magnitude tremors.

However, the explanation is simple. Widespread corruption in the Iranian Regime meant that money was leeched from the housing project- as it is with any other project that should benefit the Iranian people- and shoddy houses were built with substandard materials. This is why so many died.

Ferdows Shahbazi, 42, who lived in one of the complexes built by the Regime (part of the so-called Kindness project), told the Associated Press: “Other buildings near our apartment are not damaged as much because they were built privately. This is ‘kindness’ as the name suggests very well!”

Sarpol-e-Zahab was the worst affected town on the Iran-Iraq border where the quake struck- almost half of the total dead were in that town and even the hospital was too badly damaged to take in patients.

There were 7,817 people injured in the quake according to the state-run IRNA news agency, and as such the death count may rise dramatically as days go on. It is also possible that the Regime would downplay the true figures.

Eyewitnesses report that the outer walls of apartment buildings just tumbled away. Now rescuers are digging through the rubble to find any people trapped beneath; some are using dogs to sniff out survivors. The Iranian clerics have criticised the dogs as unclean, but why are they trying to subdue the rescue mission? Foreign Minister Javad Zarif even took to Twitter to turn down offers of help from other countries.

It’s like they are trying to hide the inadequate building work that made this earthquake so much more deadly, for fear that a light would be shown on their corruption. They are risking the lives of their own people to avoid giving attention to their crimes.

Shortly after the ‘kindness’ homes were built, many warned that the low-quality construction would cause severe problems as they sit atop many major fault lines.

Ahmadinejad denied the accusations via the mobile app Telegram and his adviser Ali Akbar Javanfekr criticised Rouhani for inefficient disaster relief, but make no mistake, this passing of blame is not warranted. Both presidents are too blame for this destruction, as is the whole of the Regime.

New York Times: An American advocacy group that has...