Infighting in Iran Reaches Another Peak 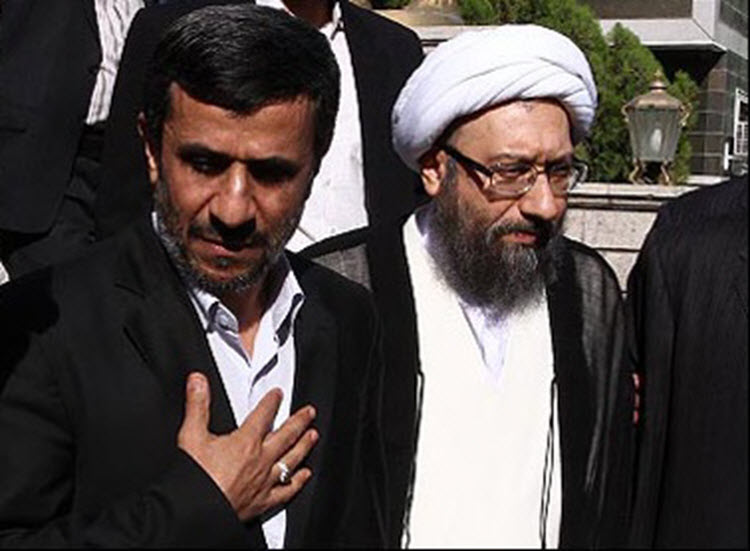 London, 20 Dec – The war of words between the factions of former President Mahmoud Ahmadinejad and conservative judiciary chief Ayatollah Sadegh Amoli Larijani within Iran is heating up yet again, after the leading mullahs publically criticised each other last week.

At a December 13 summit where he was supposed to address students, Larijani accused Ahmadinejad of trying to create “turmoil” and “sedition” after rumours about Larijani’s daughter being arrested for espionage surfaced.

He said: “The actions of those who are making [different] kinds of accusations against the judiciary are a type of sedition. Because whoever undermines [Iran’s] political system is actually committing sedition.”

Larijani continued: “In [a recent] Expediency Council meeting, [Ahmadinejad] asked the secretary of the Supreme National Security Council [Ali Shamkhani] about what’s new about the spying case of the daughter of [the judiciary chief]. [Shamkhani] replied that this story is completely a lie. [Ahmadinejad then] said, ‘You are not aware, yet we have exact information that she is in custody and we know her detention place, too.’ How is it possible that a human lies this much and has gotten so far away from the path of fairness and piety?”

He then accused Ahmadinejad and his faction of supporting jailed billionaire Babak Zanjani who was supposedly an intermediary who bypassed Iran’s sanctions.

Ahmadinejad responded via a video on Instagram on December 17, in which he threatened to disclose information related to Larijani’s performance as judiciary chief and asked for evidence to support Larijani’s claims against him within 48 hours.

Ahmadinejad said: “He [Larijani] attributed charges to me and my colleagues. He described us as seditionist, deviant and a supporter of Mr. Babak Zanjani, and accused us of these charges. However, Mr. Babak Zanjani has been in jail for almost four years and has been put on trial in closed sessions, and we don’t know what has been going on in there.”

Iranian Prosecutor-General Mohammad Jafar Montazeri, who was appointed by Larijani, promised to respond within two days from December 18 but it is not known if he has or not.

On December 19, Ahmadinejad released another video in which he asked Larijani to resign but did not disclose the allegations against him.

Ahmadinejad said: “Now, [Larijani] lacks legitimacy due to frequent violations of the constitution, laws and the emergence of signs of his inadequacy. The continuance of his [responsibility as the judiciary chief] violates the rights of the Supreme Leader [Ayatollah Ali Khamenei], the Islamic Republic and the people as the main owners of the country and the revolution, and that is why he is a usurper.”

The judiciary responded by saying that Ahmadinejad should be responding to them rather than issuing threats and accused him of trying to escape trial and punishment.

Hassan Ghaffouri-Fard, said: “The judiciary is planning to review his case, and he is attempting to affect his case by [resorting] to illogical tools. He also may think that he can make the judiciary retreat and influence the process of reviewing his case by giving one or two speeches.”

Real Cause of the Fight

It should be noted that while Ahmadinejad may be attempting to avoid charges against him and Larijani may be covering for his daughter, the real cause for this prolonged infighting is not a difference in political affiliation nor is it even an attempt to evade justice (as members of the Regime are only punished if they disobey the Supreme Leader); it is a power struggle.

Supreme Leader Ali Khamenei is dying and soon his position- which affords unchecked power and incalculable wealth- will be up for grabs. Both Ahmadinejad and Larijani want to use the opportunity and their followers see spill over benefits coming to them if their man wins.