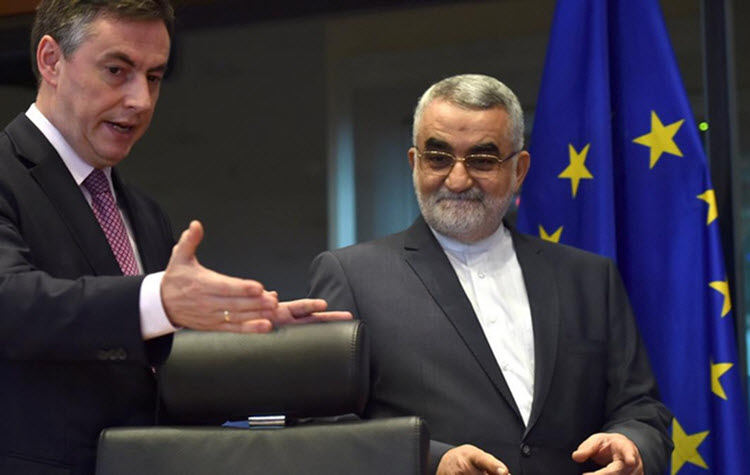 London, 30 Jan – The European Union has been roundly criticised for allowing a member of the despicable mullahs’ regime to visit their Parliament during a violent crackdown on protesters in Iran. The MEPs failed to hold Alaeddin Boroujerdi, Chairman of the Iranian Committee for Foreign Policy and National Security, to account for the crackdown, the war in Syria, or any number of other problems during his two-day visit.

Instead, they allowed him to take control of the meeting, before bending over backwards to appease him, praise the Regime, and keep quiet about the issues that matter. But why would the EU do this?

In this piece, centred around the EU’s defence of the nuclear deal as it stands in the wake of the election of Donald Trump in the US, Dr. Majid Rafizadeh argues that the EU wanted to simultaneously preserve its economic interests with Iran and the US by convincing Trump to drop the nuclear subject.

After all, the EU was expecting increased trade with Iran’s energy sector to end its dependence on Russian energy and the political complications that brought. However, as Dr. Majid Rafizadeh points out, this came with its own problems, like strengthening the Iran-Russia axis in the Middle East and moving power away from the EU.

The EU also envisaged that Iran’s young, westernized population would prefer Western products and would increase the EU’s exports to Iran. Dr. Majid Rafizadeh pointed out that this was unlikely because most of the trade would be with state entities (as the Regime control the majority of the economy) and the Regime doesn’t approve of Western influences.

Worse still, Dr. Majid Rafizadeh wrote that this money would be used to “strengthen Iran’s military complex and the hold on power by Khamenei and his Shiite cleric system”
There were also some geopolitical and strategic factors for the EU’s defence of Iran, according to Dr. Majid Rafizadeh, like the conflicts in the Middle East which were caused or exacerbated by the Iranian Regime.

This was true of Syria and ISIS, in which the EU did not have a solid strategy and instead relied on Iran to take charge.

Dr. Majid Rafizadeh wrote: “The EU’s decision to view Iran solely from the prism of economic interests and its primary goal of pursuing its trade interests, inflicts harm on ordinary Iranian people and millions of Syrians who suffer from Iran’s military expansion and human rights abuses.”

These words ring especially true today and the EU should take them to heart.

AP: Iraq's indecision on whether to ask American forces...

Russia minister: No punishment for Iran

AP: Russia will not allow the U.N. Security Council...