Iranian Protesters Need to Be Released 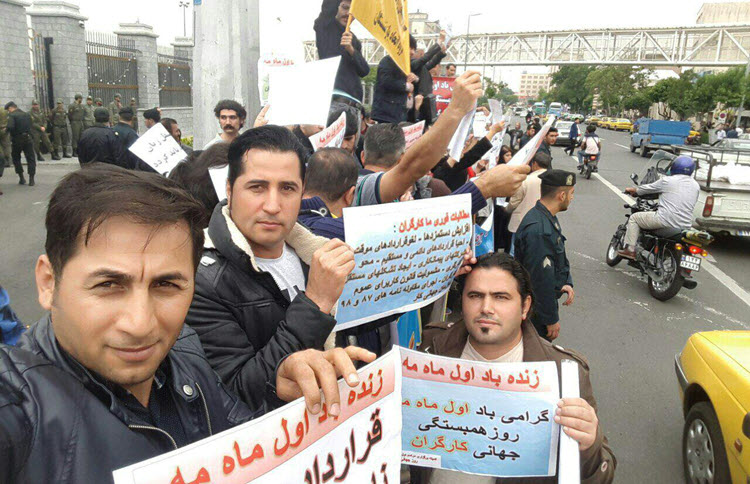 London, 8 May – Various worker’s groups and trade unions are calling for the release of several protesters in Iran who were arrested for taking part in demonstrations that called for an end to the Regime.

The protesters, who were arrested during protests outside the Parliament in Tehran on Tuesday, May 1, carried placards that read “Workers have no food to eat yet”, “Temporary contract is the worker’s slavery”, and “Oh, the billionaire minister! I have not bought meat for forty months.”

Thousands of workers, retirees, and the unemployed gathered together to highlight and protest the deplorable living conditions that Iranians are currently struggling through. This was one of many such protests throughout the country.

In response to the peaceful demonstrations, the Iranian Regime sent out their police and security forces to shut them down by any means necessary, which meant violence and mass arrests.

Maryam Rajavi, President-elect of the National Council of Resistance of Iran (NCRI), issued a statement in support of Iranian workers, in which she criticised Iranian President Hassan Rouhani for making the situation even worse and called on the workers to stand up against the Regime and its brutal policies.

She said: “Hand in hand with their ‘fundamentalist’ rivals, the so-called ‘moderate’ mullahs allowed contractor companies to dominate the country’s job market. The companies belonging to the IRGC (Islamic Revolutionary Guard Corps) and the so-called ‘reformist’ factions have confiscated the lion’s share of workers’ wages.”

She continued: “In order to achieve freedom and emancipation, you have to rely on your own power…The secret to prevail over the shameless onslaught of the clerical regime and its Guard Corps (IRGC) on your lives and rights is to associate your protests with the nationwide struggle for regime change.”

The Free Union of Iranian Workers also spoke out against the arrests, calling for the release of detainees and stressing that Iranian workers, as with all workers, have the right to organize independent International Workers’ Day events.

During the demonstrations, various workers – particularly in the oil and gas industries – pointed out how their jobs had been scaled back or eliminated thanks to outsourcing and that their wages had been held down.

Overall, there were over 2,000 strikes, demonstrations, or protests in Iran during 2017, and with the economy in the state it’s in, this is only likely to rise.

Bloomberg: Iran and world powers failed to reach a...