Iran Protests Continue With More Fire Than Ever Before 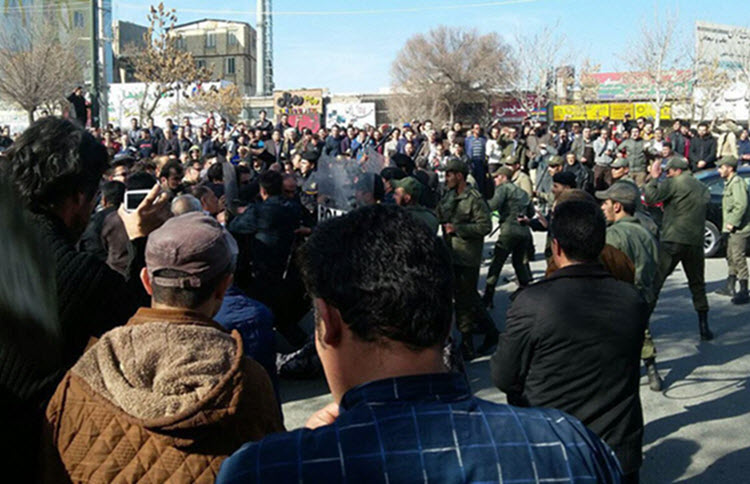 London, 3 August – Protests continued across Iran on Tuesday night as striking workers and the impoverished people refused to leave the streets, where they were demonstrating against a failing economy and the Regime as a whole, after the rial’s sudden loss in. value over the weekend.

In the past six months, the rial’s value has dropped by more than 120%, while the cost of living has shot up and the country has been plagued by water shortages and power outages.

The videos of the protests demonstrate that the Iranian people are no longer afraid of the Regime and are prepared to fight back and confront the security forces, while chanting anti-regime slogans. Slogans like “down with Khamenei”, “Our enemy is here, they are lying when they say it is the US”, “Guns, tanks, are no longer effective, mullahs should get lost”, and “down with the dictator”.

Maryam Rajavi, the President-elect of the Iranian Resistance, saluted the protesters and told The Express that the Regime was the source of all of Iran’s woes.

She said: “Now, the world is witnessing that despite the massive repression by the religious fascism, the Iranian people’s uprising is constantly on the rise. It has cornered the absolute rule of the clergy and heralds the arrival of the spring of freedom to our captive country.”

She also tweeted about the situation and called on the Iranian people to join the protests.

She said: “The time has come for rising up. The persistence of your uprising has beset the mullahs’ religious dictatorship. Today, the world can see that the voice of Iranians cannot be silenced despite massive repression, and their uprisings are carrying on until victory. These are the blazing flames of a resistance with over 100,000 martyrs, flaring up in the streets after forty years.”

These protests come shortly after Iranian rulers rejected the idea of talks with Donald Trump about a new nuclear deal that also addressed human rights and Iran’s malign actions in the region.

Political expert Dr Majid Rafizadeh said: “The reality on the ground is that the Iranian regime’s financial corruption, misuse of public funds, the widespread banking crisis, and the haemorrhaging of billions of dollars of the taxpayers’ money and of the national wealth on militia and terror groups are among the major reasons behind the present currency and economic crises… The negative trend will most likely continue as long as the Iranian regime is in power. US policy on Iran has definitely put pressure on the Iranian leaders and emboldened the Iranian people to come to the streets and demonstrate.”

He encouraged Trump to publically support the people’s call for justice.

Shahin Gobadi of the Foreign Affairs Committee of the National Council of Resistance of Iran explained that the protesters wanted regime change.

He said: “The Iranian people are determined to bring about a regime change and they are not going to stop at anything short of that. The prospect for the mullahs to find a way out is becoming dimmer by the day. This is why the regime’s senior officials keep warning about the bleak prospects that loom on the horizon for the regime and the growing role of the resistance.

Iran cleric says nuclear capability is the dignity of Islam