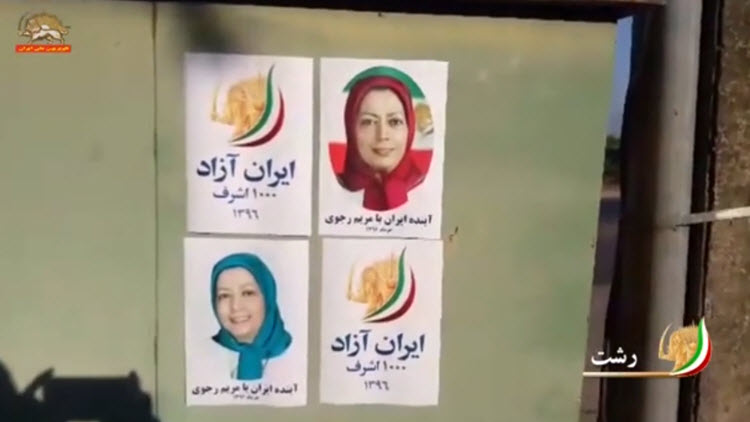 London, 29 Jun – The Iranian Resistance (MEK) have reported hundreds of acts of defiance within the country, ahead of the Free Iran gathering in Paris, on July 1.

The National Council of Resistance of Iran (NCRI)/People’s Mujahedeen Organization of Iran (MEK) report that hundreds of MEK supporters in Iran are risking their livings and their freedom in order to show their support for the MEK; from distributing pro-MEK leaflets to sticking up posters to acts of graffiti on Regime property/propaganda.

The acts, documented with video footage or photos, have been compiled into a video clip to be easily shared.

The posters show NCRI leaders Maryam and Massoud Rajavi with slogans like: “My vote regime change, down with Khamenei, our choice Maryam Rajavi.”

These acts of defiance are incredibly risky in Iran, where merely being a supporter of the MEK could lead to imprisonment and torture or even death.

The Iranian Regime, which slanders the MEK as a terrorist group despite no evidence, executes hundreds of people each year on political offences. The MEK is not a terrorist organisation but according to the US State Department, there is ample evidence that the Iranian Regime is.

The NCRI’s secretariat said “[these acts of defiance in Iran] emphasise the fact that this regime and all its factions have no legitimacy whatsoever and that the July 1 gathering represents the will of the people of Iran.”

This is why we must support the Iranian Resistance (NCRI/MEK) and its elected leader Maryam Rajavi, who currently serves as a government-in-exile and have a ten-point plan to create an Iran for the 21st century. The MEK believes in putting human rights at the centre of their democracy and creating an Iran without political oppression.

The people of Iran are risking so much in order to voice their hatred of the Regime, the least we can do is support them.

The Free Iran gathering in Paris will have over 100,000 dignitaries, politicians and activists in attendance, calling for freedom for the people of Iran. Those who will be attending, include a Syrian opposition delegation, who are being attacked by the Regime’s support for the dictator Bashar Assad in Syria, and many bipartisan politicians from the US and Europe.

US politicians, including former ambassador to the UN John Bolton, former Democratic senator (and United Against a Nuclear Iran (UANI) chairman) Joe Lieberman, former Democratic National Committee chairman Ed Rendell, and former Multi-National Force Iraq commander and U.S. Army chief of staff Gen. George Casey, who will be in attendance at the Free Iran Gathering wrote a statement earlier this month, in support of the MEK and advocating for Regime change in Iran.

The statement read: “We believe that change is within reach, not only because the regime is becoming engulfed in crisis, but also because there is a large and growing movement organising for positive change.”

In order to make it clear that they are supporting the wishes of the Iranian people, rather than interfering in the affairs of a nation state, they wrote: “The obligation to stand up to this corrupt and illegitimate regime and say ‘no more’ rests with the Iranian people alone, [but] the international community must meet its responsibility by condemning the mullahs’ oppression and embracing the Iranian people’s aspirations for a free and prosperous Iran accepted and respected around the world.”

Bolton tweeted on Wednesday: “The only long-term solution to the threat Iran poses in the Middle East is, indeed, regime change” and “There are ways of supporting the efforts of the Iranian opposition that do not involve the use of American force.”

The theme of the 2017 Free Iran Gathering is “Onward with the Iranian Resistance, Regime Change within Reach.”

This year, the gathering will focus on fighting terrorism and extremism in the name of Islam, calling on the international community to stand against the Regime’s attempts to destabilise the Middle East, and calling for a new approach to tackling the Iranian Regime.