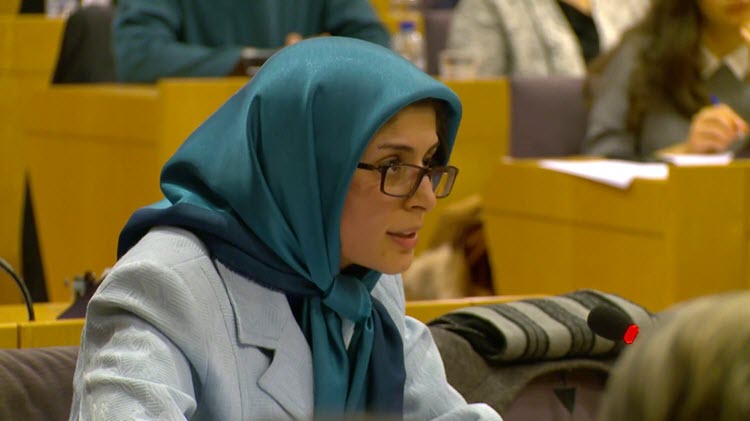 London, 30 Jun – The Iranian opposition is preparing for its massive annual “Free Iran” rally in Paris, sponsored by National Council of Resistance of Iran (NCRI). The event, scheduled for July 1st, will feature hundreds of prominent speakers from four corners of the globe, and will likely be attended by more than 100,000 people, including tens of thousands from the Iranian Diaspora. The NCRI President Maryam Rajavi’s ten-point-plan for a free, democratic Iran will be highlighted.

Journalist and Iranian activist Heshmat Alavi, took some time to interview Shabnam Madadzadeh, a young Iranian woman who is a former political prisoner recently exited from Iran. She has written articles and spoken at several events to shed light the atrocious conditions in Iran’s prisons

Some of Shabnam Madadzadeh’s remarks from the Alavi interview are presented below.

She was a college student when she was arrested, and both she and her brother were jailed for five years as political prisoners.

Deprived of contact from her family, she faced long interrogations, solitary confinement, death threats and mock executions. She was also deprived of medical care. Worst of all, she was forced to witness her brother being beaten.

“These methods are used by the Iranian regime to obtain so-called ‘confessions’ and forge a case against you in court, while depriving you of legal representation,” Shabnam Madadzadeh said.

She adds that she was deprived of any furlough, and though she witnessed “many crimes by the regime authorities, many executions and tortures inflicted not only on political prisoners, but also ordinary inmates arrested on other charges…” She was unable to tell anyone, because she was deprived of family visits and phone calls.

She was imprisoned in a ward with hundreds of other women and witnessed the human rights violations they suffered. She is now telling the world about the harsh conditions those women endured, and the circumstances inside the prison walls.

A letter has been leaked from inside Iran which was written by political prisoners in Gohardasht Prison. It calls those taking part in Saturday’s convention, “the voice of all the Iranian people in the larger prison called Iran, who all yearn for a ‘Free Iran,’ a democratic Iran.”

Shabnam Madadzadeh calls Iran “the leading state sponsor of terrorism and exports its Islamic fundamentalism to the Middle East.” She adds that the international community’s view of President Hassan Rouhani is “nothing but a fantasy and mirage.” Rouhani was recently elected to a second term in office, and is displayed as the image of a moderate within the Iranian regime.

“I was a young college student and spent one year of my time in prison during Rouhani’s tenure. After being released I witnessed how the highly boasted nuclear deal signed by the P5+1 with Iran failed to render any positive change in people’s lives. In fact, their living conditions have become far more difficult. The Iran nuclear deal has only loosened sanctions in favor of the ruling elite in Tehran, and yet human rights violations and state-backed violence have ramped up,” said Shabnam Madadzadeh.

During the tenure of the “moderate” Rouhani, executions have reach approximately 3,000. In the same time period, protests have increased, including during the months leading to the presidential election. Even after the election, teachers, workers and many other people are protesting as earning enough income to provide for basic needs becomes impossible. In fact, life has become so unbearable for many that suicides are increasing.

The windfall Iran gained after the nuclear deal has not helped the general the population. Shabnam Madadzadeh said that, “The Iranian people are demanding the mullahs’ regime bring an end to warmongering and exporting terrorism to neighboring countries that they see as their friends. This money belongs to the Iranian people and must be allocated to advance their needs and welfare.”

It follows that by negotiating with Iran, the West will encourage further meddling in the Middle East and even beyond.

“For the first time this year I will be taking part in the NCRI’s annual convention in Paris scheduled for July 1st,” said Shabnam Madadzadeh. “The massive “FreeIran” rally will host hundreds of prominent international dignitaries and MPs from the United States, Europe and the Middle East. The message will highlight the necessity to establish a united front against Iran-sponsored international extremism under the banner of Islam,” she adds.

The “Free Iran” rally will highlight the Iranian people’s demand of regime change in Iran. It will be the voice of the protests against the regime inside Iran, and will demand a firm international approach in the face of Iran’s hostility.

“I am certain that that the presence and solidarity of various Western and Arabic governments and nations will be very inspirational for all. I hope that I, as an Iranian who has decided to be the voice of my people, can be successful in sending their message: the Iranian people are determined, at any price, to topple the mullahs’ regime once and for all,” concludes Shabnam Madadzadeh.

International Herald Tribune - Maryam Rajavi: How should the...