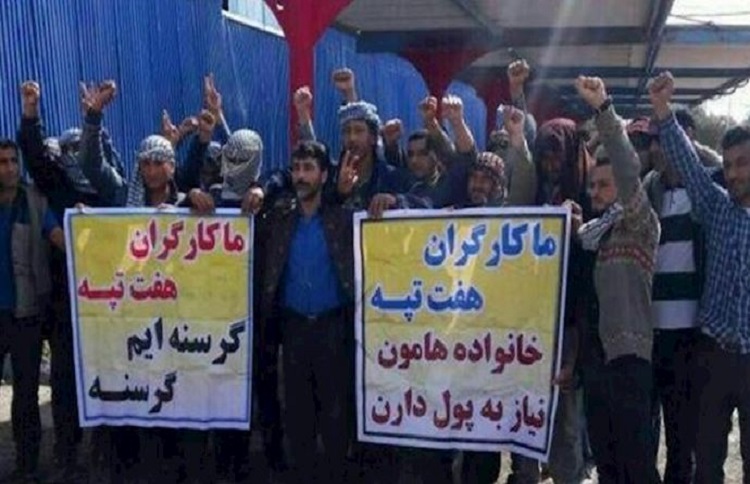 Haft Tappeh Sugarcane Company workers entered the 52nd day of their strike on Wednesday with a rally outside the governor’s office in Shush, where they once again declared their demands and refused to return to work until these demands are met.

They’ve often marched into the city during their protests and begun chanting slogans against the company officials and their criminal deception of the workers under the guise of privatization.

Meanwhile, the state-run media is warning about the possibility of these protests, mixed in with various other protests by the Iranian people, causing a nationwide uprising.

On July 29, Aftab-e Yazd wrote: “When the people have nothing to lose, they will let go of life itself. Something must be done before the situation gets worse.”

While Mostaghel daily said that when the poor get poorer, the rich get richer and that soon the two groups would come to blows with the regime the loser.

This feeling is shared by regime insiders worried that the mullahs’ mishandling of the coronavirus and the damaged economy would spark an “uncontrollable” uprising.

Assembly of Experts member Hashem Hashemzadeh Herisi warned: “The current situation of the society is unbearable. The distance between the people and the establishment grows every day… The situation is very critical.”

Sociologist Amanollah Gharayi Moghadam said: “The youths are fed up. They are waiting. It was just two weeks ago when social media users tweeted 12 million times the hashtag ‘do not execute’ in protest to death sentences for three youths arrested during the November 2019 events. We must think of our youths. We must do something, otherwise, unfortunately, the danger is predicted. If this match is lit, putting down the fire will be very difficult.”

Iranian opposition President Maryam Rajavi, praised the protesting workers across Iran, citing the stikes by oil workers specifically, emphasizing that the workers have rightfully risen up to demand their wages and pensions that were stolen by the mullahs.

She tweeted: While saluting the workers on strike in the oil facilities and refineries of Khuzestan, Bushehr, Hormozgan, Fars, Isfahan, and Ilam, I urge working people across Iran, particularly the oil workers and workers in other sectors, to rise up in support of them.”

Presently, the growing escalation of the protests has increased the pressure on the Iranian Government. Protests of Haft Tapeh workers today are certainly one of the main forefronts of the struggles of the working class in Iran.

Oil Workers in Iran on Strike

Bloomberg: For evidence of how Iranians are embracing President Hassan...