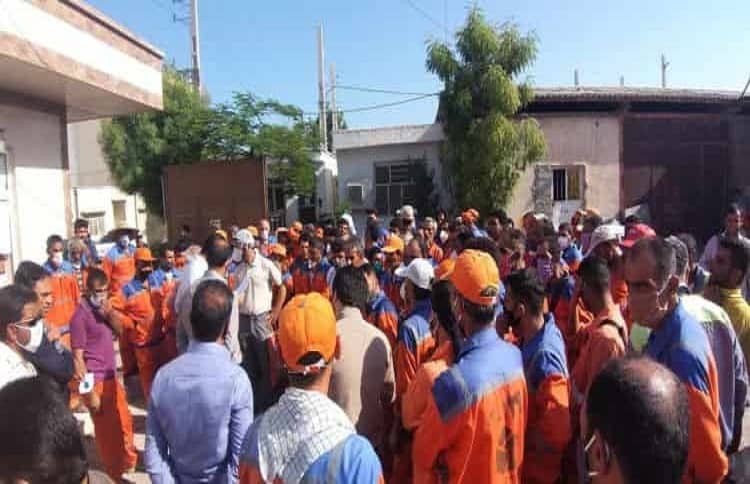 The wave of labor protests in Iran began in the second half of May 2020 and peaked in June and July. We are now at the end of August.

This month, there was not a day that municipal workers did not protest in one of the different cities of the country.

The main reason for many protests, especially by municipal workers in different parts of the country, is wage arrears. Most workers are hired on temporary, low-wage contracts by manpower contractors.

The municipality is one of the largest public institutions in Iran, which operates with a high share in employment and municipal services.

Municipal workers and employees are divided into four groups according to the law.

First – Fixed employees who have been employed in one of the groups of the salary table subject to Article 1 of the Law on Coordinated Payment System for Government Employees, approved in 1991 and its subsequent amendments to hold one of the organizational positions, in accordance with the municipal employment regulations.

Second – Official employees who have been employed in the municipality according to the National Employment Law approved in 1966 and its subsequent amendments.

Third – Temporary employees who are employed by the municipality according to the contract for a certain period of time and a specific job; The employment regulations of such employees and their subsequent changes will be prepared by the Ministry of Interior and will be implemented with the consent of the Management and Planning Organization of the country.

Fourth: Municipal workers who are subject to the Labor Law approved in 1990 and its subsequent amendments.

Differences between the first and second groups with other groups

The first two groups have job security and adequate income and are entitled to annual benefits and bonuses and are mostly employed in senior management or bachelor’s degrees.

Municipal workers are the main victims of government aid cuts

The fourth group includes workers who are mostly attracted to the municipal services sector, including garbage collection, green space, motor services, and even the fight against pavement blocks mainly by the street vendors. Most of these groups work with short-term contracts through manpower contracting companies and even in some areas in the form of volumetric contracts; This group receives the lowest wages and is also deprived of annual municipal bonuses.

Requiring municipalities to be self-sufficient and cutting government subsidies to this public institution and municipal services over the past two decades has made working conditions more insecure and difficult for workers in this sector.

In recent years, declining municipal incomes have repeatedly delayed the payment of low wages to workers in the most difficult conditions; In some areas, workers have not been paid for nearly a year, and their protests have been met with repression in the form of dismissal, redundancies, short-term detention, and beatings.

In the latest example, workers in Kut Abdullah municipality in Khuzestan province staged a sit-in to protest their wage arrears, but some were arrested and two were fired.

Iran Protests Continue Across the Country

British FM to chair meeting on Iran at UN: London