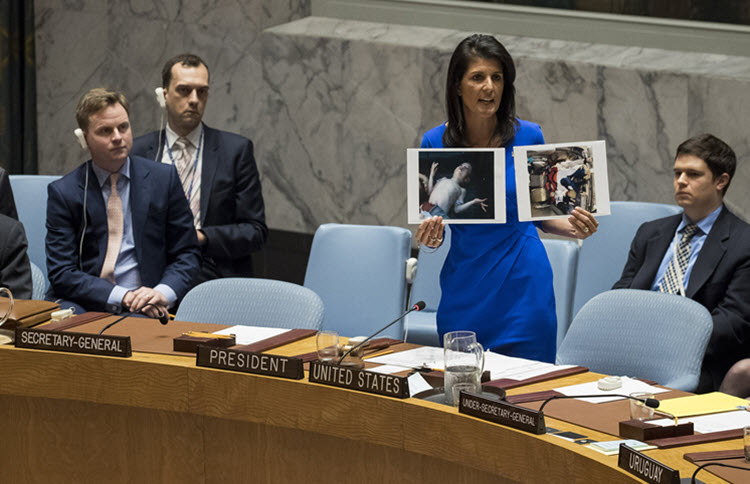 She outlined the Trump administration’s three goals in Syria:

1. Ban on the use of chemical weapons

3. Prevent Iran from “taking over the area”

Insisting that there is no fixed date for the return of US troops from Syria, Haley said, “We haven’t said that we’re going to bring them home in six months. What we are saying is at some point we want to see our military come home.”

Although not conflicting, these two statements project a sense among observers is that Trump is uncomfortable forecasting U.S. power on the ground in Syria.

Air strikes have a limited effect in the war-torn country, and a total withdrawal of U.S. troops from Syria would be a great concern to Israel, in that it could create a power vacuum in Syria for Iran to expand its influence.

The statements regarding possible withdrawal, as well as the goal of containing Iran, that Haley mentioned, come at a time when the relationship between the Trump administration and Israeli Prime Minister Benjamin Netanyahu’s government are strained, the Jerusalem Post reported, adding that a potential U.S. withdrawal from Syria has prompted “alarm in Jerusalem that Israel’s fight against Iran would be waged alone.”

It appears that Trump will keep U.S. troops in Syria for as short a time as possible, which will undermine Israel’s leverage with the Russians to limit Iran’s involvement in Syria. Meanwhile, it is reported that Russia is considering providing S-300 surface-to-air missiles to Syria, which Israel fears will erode its air dominance over Syria and Lebanon.

According to the Jerusalem Post, Netanyahu has reached out to the British PM Theresa May. He told her, “Iran is the leading source of instability in the region,” and Assad “needs to understand that when he lets Iran build a permanent presence…he is endangering Syria and the entire region.”

In his opening remarks at the Arab League summit in Dhahran on April 15th, Saudi Arabia’s King Salman bin Abdul Aziz called Iran’s actions in Arab countries “terroristic”. When the summit concluded a communique was issued, calling for additional international sanctions on Iran. Tehran was also urged to withdraw “its militias” from Syria and Yemen.

King Salman said, “We renew our strong condemnation of terrorist acts carried out by Iran in the Arab region, and we reject its blatant interference in the internal affairs of Arab countries.”

Iran warns over ‘US weak points’ in Iraq, Afghanistan