Iran’s women hounded on the streets for mal-veiling 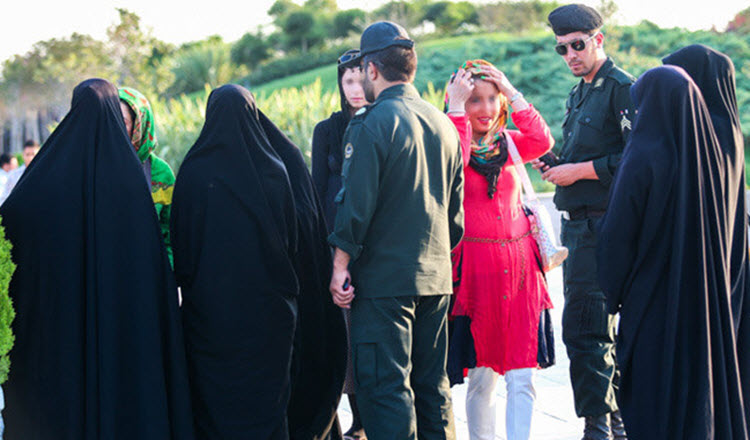 London, 16 Apr – The oppression of women in Iran has increased in recent weeks as the country’s Gasht-e-Ershad (meaning Guidance Patrol, but commonly known as the “morality police”) steps up its operations. Tasked with enforcing the strict laws governing women in Iran, the police have set up more “morality stations” throughout the country.Elaheh Arj, the vice chair of the Women’s Committee of the main Iranian opposition coalition National Council of Resistance of Iran (NCRI) told the International

Business Times: “In recent months Iran’s regime has stepped up its crackdown on women for ‘mal-veiling’ and its morality police hound the streets to arrest women on the pretext of improper veiling. Iran’s first gender-segregated train, carrying only women, started rolling on 4 April 2016 between Tehran and Mashhad”.

The morality police are able to impound property and make sweeping arrests. The restaurants of Vanak Square, a popular spot for young people, have been hit by raids in recent weeks. An employee of one of the restaurants on Vanak Square told the NCRI: “People have been arrested during this period in raids conducted on public places like restaurants. They are subsequently transferred to an unknown location by vans that are parked nearby for this purpose”.

Public behaviour is heavily policed in Iran. Iranian programmers have created a mobile app which allows users to mark spots on a map of Tehran where police units are located.

Women who do not observe a strict hijab are amongst the morality police’s favourite targets. Over 40,000 cases of “bad hijab” were handled during the last eight months of 2015 according to Brigadier General Seymour Hosseini. Police Spokesman Saeed Montazer al-Mahdi said that during the Persian year ending in March 2014 over three million women were warned, made to write pledges or referred to the justice system over the state of their attire.

Drawing attention to women also being banned from attending and participating in many sporting events Arj emphasised the extremity of the Rouhani government: “It’s a myth when people say things have improved in Iran under the so-called ‘moderate’ President Rouhani. In fact, it’s the total opposite”.