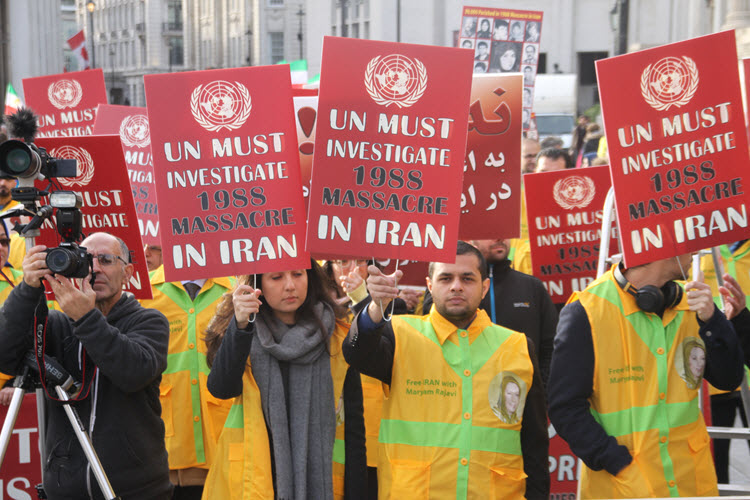 London, 19 Jun – Several non-governmental organisations within the United Nations have submitted a joint written statement to the UN Secretary-General, António Guterres, asking him to launch an enquiry into the 1988 massacre of political prisoners in Iran.

This statement, submitted during the 35th session of the UN’s Human Right Council, was written by the Nonviolent Radical Party, Transnational and Transparty, the Women’s Human Rights International Association, the France Libertes :

They write that the Iranian Regime, who massacred 30,000 political prisoners (mainly members of the People’s Mojahedin Organization of Iran (PMOI/MEK)) in 1988, have been allowed to get away with these crimes against humanity for far too long and that there is much consensus for this.

They cite many examples, including:

• Guterres’ March report to the UN Human Rights Council on human rights in Iran, in which he mentioned that he received many letters from the families of the 1988 massacre’s victims, pleading for justice for their loved ones.

• Justice for the Victims of the 1988 Massacre in Iran (JVMI), a London-based NGO, published its findings following an investigation into the massacre, which concluded that inaction by the international community has allowed the Iranian Regime free reign to violate international law and human rights

During 1988, some 30,000 people were executed because of their political beliefs on a fatwa signed by Supreme Leader Khomeini.

According to the statement by the NGOs, the accused were put through ridiculously biased trials, which last only a few minutes.

The statement read: “According to numerous reports the procedure of the Death Commissions was very simple. The first question was: ‘What is your political affiliation?’ Those who answered ‘Mojahedin’ were sent to the gallows. The ‘correct’ answer was ‘Monafeqin’ (hypocrites, the derogatory term used by Iranian authorities to describe the PMOI). According to Montazeri in some cities this response wasn’t enough and prisoners were tested to see if they would be willing to execute other PMOI members or give televised interviews condemning the group. A negative response meant execution.”

Their bodies were buried in mass graves and hidden from the families.

No one in the Iranian Regime has been brought to justice for these crimes, rather they have been protected and promoted into positions of unimaginable power. Current ‘Justice’ Minister, Mostafa Pour-Mohammadi, President Hassan Rouhani, and 2017 Presidential Candidate Ebrahim Raisi were all on one of the Death Commissions which presided over the sham trials.

Meanwhile, the families of the victims are treated appallingly, whenever they try to discern what happened to their family.

Asma Jahangir, the UN Special Rapporteur on the situation of human rights in Iran, mentioned in her March report to the Human Rights Council, that Maryam Akbari Monfared, a political prisoner serving 15 years in prison for her support of the PMOI, is being denied medical treatment after she wrote a letter demanding justice for her siblings who were executed in 1988.

Even those within the Regime were not permitted to speak up against them.

In 1988, Ayatollah Hossein Ali Montazeri, the deputy to the Supreme Leader was sentenced to house arrest for the rest of his life after criticising the Regime for executing those who had already been sentenced to prison and working against Shiite law by executing pregnant women and teenagers.

In 2016, his son Ahmad Montazeri, was sentenced to several years in prison after he released an audio tape of his father’s conversation with the Death Commission members. It seems the only people to receive any sort of punishment in relation to the 1988 massacre are those who spoke out against it.

What the UN must do

This statement cites more than enough evidence that the Iranian Regime is guilty of crimes against humanity so the UN must launch an inquiry.

1. the UN High Commissioner for Human Rights and the UN Human Rights Council place the massacre on their agenda and appoint an international commission of inquiry to investigate

2. the Special Rapporteur on the human rights situation in Iran, Asma Jahangir, carry out an inquiry into the 1988 massacre

3. the Special Rapporteur on the promotion of truth, Pablo de Greiff, includes the case of Iran’s 1988 massacre in his subsequent report to the Human Rights Council