US Counters Iran in Syria 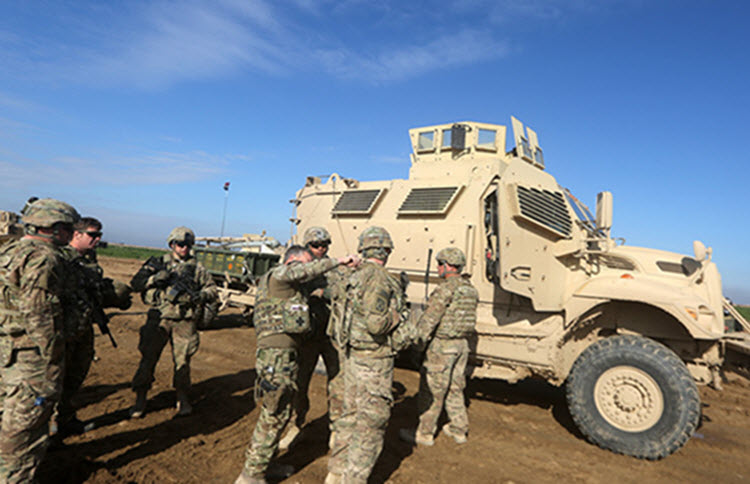 London, 26 July – The American military base near the Al-Tanf border crossing in Southern Syria was set up to train local Syrians to fight ISIS, but it also serves as an effective counter to Iran and its malign activities, according to US officials and experts.

Army Maj. Josh Jacques, a spokesman for US Central Command (CENTCOM), said: “Our mere presence there accomplishes that, whether it’s a goal or not.”

He went on to explain that the US military’s primary objective in Syria is the defeat of ISIS, so American soldiers at al-Tanf are currently training a Syrian group called Maghawir al-Thawra (MaT) who will fight ISIS militants.

CENTCOM commander US Army Gen. Joseph Votel said that while America is not directly focused on Iran in Syria, they can still work to stop Iran’s “destabilizing acts”.

He said: “There are opportunities for us to indirectly influence their [Iran’s] activities by our presence, by the pursuit of our ongoing operations, that I think disrupt and make it difficult for them to pursue their unilateral objectives.”

The US base is in an area where Jordan, Iraq, and Syria meet, through which Iran hoped to establish a Shiite Crescent to allow the free passage of weapons, money and troops to their proxy militias.

However, the US has created a “deconfliction zone” around the base, which aims to protect the US against ISIS by preventing any non-US ally from entering. This means that Iranian troops can’t pass through here and thus disrupts their land bridge.

Brian Katulis with the Center for American Progress, said: “One quiet rationale for maintaining a presence there is to at least monitor and then perhaps deter some of the Iranian forces, or Iranian-backed forces that may have used that part of the country to transit into Syria.”

It should be noted that this zone cannot completely stop Iran’s movement through Syria’s southern border as Iran often uses planes instead to transfer things.

However, the US is using the area effectively to protect itself and US ally Jordan.

Katulis said: “As small as that [U.S.] presence is; I think it sends a signal.”

When ISIS is eventually defeated, the US will need to need a long-term political transition strategy to address their need to stay in Syria to counter Iran – a key ally of Syrian dictator Bashar Assad.

Michael O’Hanlon, a senior defence fellow at the Brookings Institution, said: “We’re sort of in a transition phase, where you can still sustain the current effort on the grounds of it being anti-ISIS, but everyone recognizes that the days of that argument carrying the day are numbered.”

The devaluation of Iran’s national currency, inflation, and the...