Irish Times: When Iranian officials were drawing up plans for the country’s foreign minister Manouchehr Mottaki to visit Ireland, they never expected that the trip would make headlines for very different reasons to what they had intended. 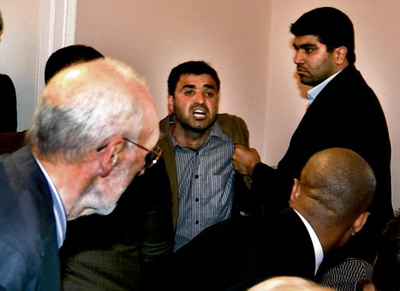 WHEN IRANIAN officials were drawing up plans for the country’s foreign minister Manouchehr Mottaki to visit Ireland, they never expected that the trip would make headlines for very different reasons to what they had intended.

The purpose of the two-day trip, a “working” as opposed to “official” visit in that Mr Mottaki was not formally invited by the Irish government, was part of efforts by Tehran to foster an “exchange of views with countries that have an independent perspective”, according to an Iranian official involved in organising the visit.

Meetings with Tánaiste Mary Coughlan and Minister for Foreign Affairs Micheál Martin were requested and granted.

The meeting with the former centred on bilateral relations including trade and the potential for developing stronger education links, with a particular focus on the possibility of increasing the number of Iranian PhD students studying in Ireland.

During the meeting with Mr Martin, concerns over Iran’s human rights record and nuclear programme, were discussed in addition to the moribund Middle East peace process.

Mr Mottaki also addressed gatherings at the Glencree Centre for Peace and Reconciliation in Wicklow and at the Institute of International and European Affairs (IIEA) in Dublin.

On its website, the IIEA had billed Mr Mottaki’s address as an “opportunity for an Irish audience to hear at first hand the foreign policy intentions of the government of the Islamic Republic”.

Two Iranian dissidents who came to Ireland to claim political asylum some years ago managed to gain entrance to the gathering, despite the fact IIEA events are normally only open to members and guests who have confirmed attendance in advance.

Shortly after Mr Mottaki began his address, one of the men, Reza Shiraz, began shouting “dictator, dictator”. Mr Shiraz was manhandled by Mr Mottaki’s two Iranian bodyguards before gardaí, who were monitoring a protest outside the IIEA, arrived.

Mr Shiraz said he was later treated in hospital for bruising and cuts to the mouth. Some time later, the second man, Shaho Zamani, began heckling Mr Mottaki about the execution of Kurdish political prisoners in Iran. He too was grabbed by Mr Mottaki’s bodyguards before gardaí intervened to escort him out.

Labour TD Joe Costello said many people had contacted him to express concern about the actions of Mr Mottaki’s bodyguards, footage of which was broadcast on RTÉ. “[The] very minimum that is now required is a strong message from the Department of Foreign Affairs to the Iranian embassy that this sort of violent behaviour from their personnel will not be tolerated in the future,” he said.

Iran’s ambassador to Ireland, Ebrahim Rahimpour, told The Irish Times that Mr Mottaki’s bodyguards acted only because “Irish security had slipped”. He said there were serious concerns over how the two protesters were able to gain entrance to the event, which was attended mostly by diplomats and academics.

Mr Shiraz and Mr Zamani told The Irish Times they were “surprised and even a little shocked” at how easy it had been to gain entrance. They said they came with the intention of disrupting Mr Mottaki’s address. “After all, I wouldn’t be allowed to speak like that in Iran,” said Mr Zamani.

IIEA director Daithí O Ceallaigh acknowledged the incident raised questions about security procedures. “We have to review security at the institute, and that has already begun,” he said. “Clearly we don’t like to see this sort of thing happening.”

A small crowd of protesters, mostly Iranians living in Ireland, demonstrated outside the IIEA during the event. Some carried flags of the Mujahedeen-e Khalq, an armed opposition group designated a terrorist body by Tehran. Mr Mottaki had to be shielded with an umbrella when protesters threw eggs as he left the IIEA. There were scuffles between gardaí and protesters as Mr Mottaki’s entourage drove off. Four men were arrested and later released.

The Department of Foreign Affairs said it had received one letter from a member of the public complaining about Mr Mottaki’s visit in general, and the incident at the IIEA in particular.

The event has featured heavily on Iranian diaspora websites and blogs. Footage of the protest and of Mr Shiraz and Mr Zamani being manhandled has been viewed on YouTube more than 30,000 times. It has been broadcast on US-based Iranian TV channels.

Mr Mottaki’s visit drew attention in Israel. A Jerusalem Post report on the first day of his trip quoted Israeli officials as saying “the Irish were being used to create the perception that Tehran had not been internationally isolated” as the UN Security Council passed a fourth round of sanctions on Iran. The Israelis claimed the visit was part of efforts to avert further EU sanctions.