Four Protests in Iran on Monday 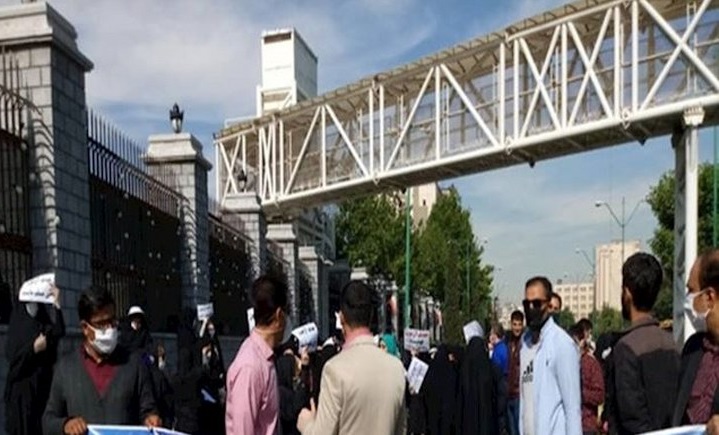 Four separate workers’ protests were held on Monday in Iran, even amid the coronavirus crisis, which shows how desperate these people must be and the stupidity of sending people back to work during a pandemic.

In Tehran, teachers came from all across Iran to protest outside the parliament over the fact that their problems had still not been addressed, despite many meetings with various officials and parliamentarians over the years.

One teacher told the state-run ILNA news agency:  “While we have been teaching for years and a number of us here are working as part-time teachers in various schools, we should not be asked to give tests to prove our teaching abilities. We are demanding these tests be canceled and for us teachers to be allowed into teachers universities.”

Many of those in attendance have been teaching in remote villages and do not earn a lot for their challenging work.

In Kerman, more than 3,500 employees of a local coal mine went on strike to protest their demands not being met by mine officials. They want wages increased to compensate for the risks of their job, their years of service, and other occupational pensions.

After a previous rally, government officials said that these conditions would be met by April 29, but that no measures have been taken and workers have been left in limbo.

There were two rallies held in Ahvaz on Monday.

The first was from those employed to work on the city’s green areas, who staged their protest outside the Khuzestan Province Governorate Office, over not receiving their paychecks since February and not receiving their New Year bonuses in March. (The Persian calendar year runs from March 21-March 20.) They noted that they had not received any answers after previous inquiries.

The second was from employees of the National Iranian Drilling Company (NIDC) over the mass firing of their colleagues, with one protester advising that the company had already laid off 100 employees and that there are plans to dismiss 500 more.

The protesting employees held signs with slogans like “Denying us of bread is no different than cutting off our heads”.

This is the third rally that NIDC employees have held during the past few days.

In the previous week, in the run-up to International Workers’ Day on May 1, several other protests were held by Iranian workers, including:

The emerging axis of Iran and Venezuela

German fisher to go on trial in Iran

AFP: A German arrested along with a Frenchman during...