Iranian Mullahs and Their Fears From PMOI/MEK 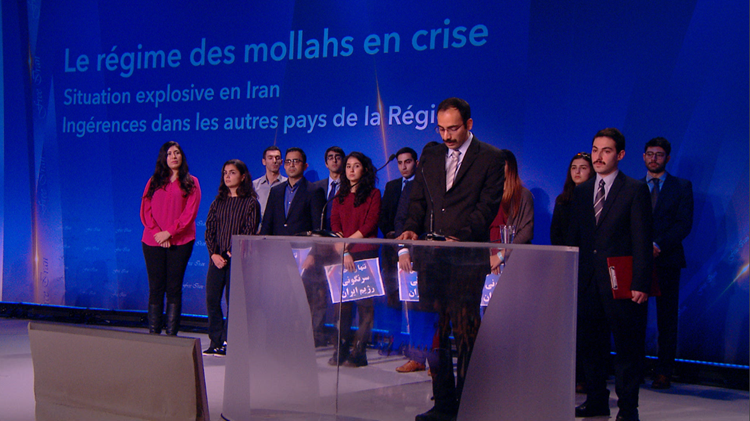 At the conference titled, “The explosive situation of Iran, the mullahs’ regime encircled by crises” on 16 December at the Palais Brongniart in Paris on the Iranian subject, Misagh Yazdannejad a young Iranian activist who recently left his country after spending more than nine years of his life in the jails of the Mullahs attended and shared his experience under the rule of Mullahs. Here is the text of his touching discourse
Greetings to everyone. And I thank all the distinguished guests who have voiced support for the Iranian people and Resistance in all these years.

My name is Misagh Yazdannejad. I am 31 years old and was imprisoned for nine years in Iran because I took part in ceremonies honoring the victims of the 1988 massacre and for sympathizing with the People’s Mojahedin (MEK) I left Iran secretly last year and have been in Europe for the past few months. As someone who has recently come from Iran and out of prison, I would like to say a couple of things.

First, there is a lot to say about the regime’s prisons and atrocities. When imprisoned at the age of 20, I saw many crimes committed in prisons for the next 10 years. What I want to stress upon today is that the regime fears the PMOI/MEK the most. One interrogator told me that if I had worked with any other opposition group, they would have not minded. But because I was a sympathizer of the PMOI/MEK, they had arrested me. He was telling me that the number one agenda item for the Intelligence Ministry is the PMOI/MEK. Another interrogator would nervously tell the prisoners whenever there were some news about the Resistance movement, what would you do to us if the regime was to be overthrown tomorrow?

In another example, once I was in solitary confinement, a paranoid interrogator was angrily telling me to send a message to the PMOI/MEK to urge the group not to report so much on their television program on the state of prisons.

Even in solitary confinement, I could see the impact of, and the regime’s paranoia over, the Resistance’s television network, Simay-e Azadi.

The second point I would like to make as a young man, who was in Iran and dealt with many families and different sectors of society, is that the Iranian people despise this regime. Despite stage-managed schemes for foreign guests, the people of Iran reject the mullahs and demand their overthrow. Even within the regime’s rank-and-file, many are disenchanted and opposed to the regime, hoping that oppression would end soon. The people are quite sympathetic to the PMOI/MEK because they see them as symbols of perseverance and resistance against the regime.

Although through sheer terror and repression, the clerical regime has been trying to prevent the outpouring of opposition and protests, nevertheless, at every opportunity, this fire beneath the ashes reignites.

In the streets, in the subways, in the shops, in the Bazaar, everywhere, there’s talk of when the mullahs will be overthrown. Laborers, public employees, students, civil servants, and average citizens on the streets consider the ruling regime and its corruption and embezzlement to be the cause of inflation and economic paralysis. I heard from people in the shops that the reason for such high prices is the war in Syria.

Even prisoners charged with common crimes are sympathetic to the PMOI/MEK and expressing their disdain towards the regime, hoping that it would be overthrown.

Let me end my remarks by expressing the hope that we can shoulder-to-shoulder with our beloved people overthrow the regime as soon as possible and liberate Iran from the yoke of religious dictatorship.

I sincerely thank you for your support to us and to our people in this path.

Thank you very much.