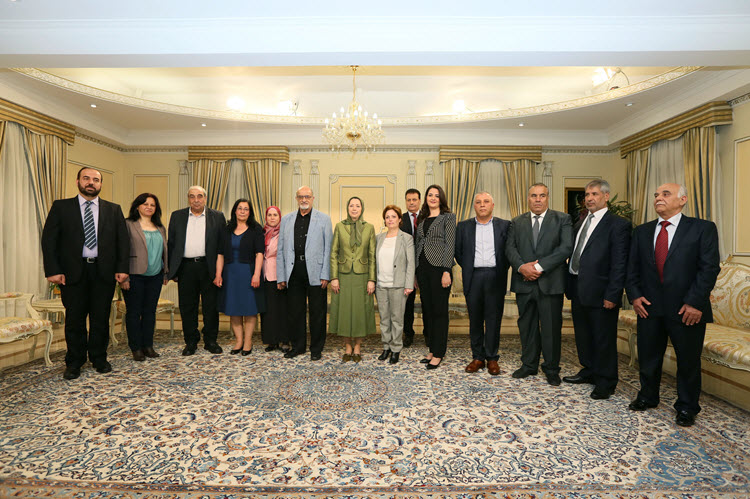 Paris, 15 Jun – On Saturday, 11 June, the National Council of Resistance of Iran hosted a meeting at its headquarters outside of Paris, France to mark the occasion of the Islamic holy month of Ramadan. In it, members of the Iranian opposition and NCRI President Maryam Rajavi hosted members of their Syrian counterparts and expressed support for and solidarity with the Free Syrian Army and other democratic rebel groups that are also back by Western powers including the United States.

The event hosted members of the Syrian opposition, and attendees heard a speech by Haitham al-Maleh, the chairman of the Syrian National Council’s legal committee. After reading a passage from the Quran describing Muslims’ requirements during the holy month, Maleh proceeded to deliver comments effectively reiterating his hosts’ declarations of common cause between the Syrian and Iranian opposition movements.

“We are together suffering from a common enemy,” he said, “which resides in the mullahs’ sectarian regime, whose crimes have gone beyond the boundaries of Iran to reach Iraq, Syria, Lebanon and Yemen.”

Tehran has been directly involved in fighting in Syria nearly since the beginning of the rebellion against President Bashar al-Assad. In that time, Iranian-backed Shiite rebels initiated a civil war in Yemen, as well, ousting President Abed Rabu Mansour Hadi and leaving the country divided to this date. The Iranian regime has also long sponsored the Lebanese terrorist group Hezbollah, which holds sufficient power to be widely considered a sort of parallel government. Furthermore, in Iraq, the Iranian Revolutionary Guard Corps contributed to the efforts of Shiite militias during the American occupation, and Tehran was subsequently credited with encouraging the consolidation of Iraqi government power into Shiite hands.

All of this has led some Iranian officials to boast in recent years that the clerical regime effectively controls the capitals of each of these four Arab nations. In his speech, Maleh suggested that Iran has hegemonic ambitions that go even beyond this. He alleged that there are “sleeper cells” in various regions of the Middle East, which are under Iran’s control and serve to “shake those countries and push them into internal conflicts” in order to encourage the embrace of Iranian influence.

The NCRI advocates for the ouster of the Iranian regime, as well as that of regional powers like the Assad regime, which are closely allied to Tehran. This platform is enhanced by a 10 point plan outlined by Mrs. Rajavi regarding what the future of the country will look like after the Iranian people have facilitated popular regime change. In addition to commitment to democratic elections, the rights of women and minorities, and a non-nuclear future, the plan specifies peaceful co-existence with neighboring countries, in contrast to the Islamic Republic’s interventionism.

Maleh evoked this position in his speech on Saturday, emphasizing that what the Syrian opposition wants is “good relations” with the Iranian people. He went on to suggest that the prospects for those relations indicated by the mutual struggles of the Iranian and Syrian people against closely-related dictatorial regimes in their own countries:

“Iran, more than any other country, is in dire need of a revolution from within, and the ancient Iranian people are capable of carrying it out. History has proven that a united people cannot be defeated, and you have in the Syrian people an example of determination.”

Paris Attack: Jihadi Cancer Has Its Roots in Tehran

Source: THE DIPLOMAT By Struan Stevenson“The spread of violent jihad...

AFP: Iran has arrested six adherents of the banned...