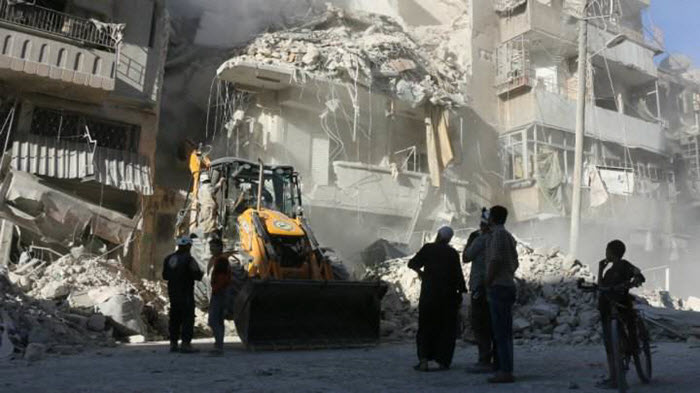 London, 27 Sep – Since the chilling bombings of the humanitarian convoy near Aleppo in Syria, prominent international political figures have expressed their concerns over the devastating forces that have swept across Syria, particularly those supported by Russia and Iran.

France 24 reported that General Ban Ki-moon (the UN Secretary) was “appalled by the chilling military escalation in the city of Aleppo, which is facing the most sustained and intense bombardment since the start of the Syrian conflict.” Talking via a spokesman, General Ban Ki-moon warned against using indiscriminate weapons systematically in areas that are highly populated in Syria, as these acts can quickly to lead to war crimes.

With the USA fighting on the side of the Syrian rebels, Russia has supported the military forces of the notorious Syrian President Bashar al-Assad. Following the bombing of the UN humanitarian aid convoy near Aleppo last Monday, September 19, the hostile relationship between these two countries has escalated even further in Syria. During the attack, 18 trucks of a total of 31 were destroyed. As a consequence, the UN have suspended further aid to be delivered in convoys to the areas near Aleppo.

The US intelligence has reported that the attack was carried out by Russian forces, based on their findings that two Russian Sukhoi SU-24 planes had been spotted in the air above the convoy at the same time when the attack took place. Officials from Russia has claimed that they have nothing whatsoever to do with this situation.

Officials from the European Union have also been unwilling to jump to the same conclusion as they lack sufficient intelligence on the matter. Despite not knowing who is responsible for the attack, the EU has condemned the act as inhumane and cruel. Federica Mogherini (High Representative of the European Union for Foreign Affairs and Security Policy) and Christos Stylianides (Humanitarian Aid Commissioner) have stated that the attack poses “alarming violations of international humanitarian law”.

Jean-Marc Ayrault, the Foreign Minister of France, has named Russia and Iran as al-Assad’s supporters. As reported by Reuters, he released a written statement which demanded that both countries withdraw their strategy which can only lead to “a dead-end.” He warned that – should they fail to oblige – Russia and Iran are both at risk of becoming “accomplices of the war crimes committed in Aleppo.”

Saad Hariri from the Lebanese Parliament also argued that Iran should withdraw its forces and “stop meddling in Arab affairs, from Yemen and Bahrain to Iraq, Syria, and Lebanon” in an article for The New Yorker.

IMF to assess Iran economy in next six months

Reuters: The International Monetary Fund will visit Iran in...