London, 22 Dec – A report by an Iranian opposition group provides information that the Islamic Revolutionary Guard Corps (IRGC) were a significant force that helped retake Aleppo from rebel fighters.

Foreign Affairs Committee Chairman of the National Council of Resistance of Iran (NCRI), Shahin Gobadi, spoke in a video conference widely circulated on Wednesday. The video seems to be a follow-up to a report collated by the MEK and released to The Washington Times on Tuesday.

“The forces that occupied Aleppo were actually the IRGC and foreign mercenaries under their command,” said Gobadi, who identified the Lebanese Hezbollah, Iraqi militias, the Afghan Fatimiyoun militias and the Pakistani Zeynabiyoun militias as the main forces under IRGC command in Aleppo.

The NCRI is part of the People’s Mujahiden of Iran or MEK, the largest opposition group to the Iranian government, explained an article in the Middle East Eye, by Arwa Ibrahim on December 22. The MEK has a well established record of accurately reporting Tehran’s misdeeds for over a decade, including its attempts to hide nuclear weapons-related facilities from UN inspectors.

The MEK relied on its network of spies inside the government and IRGC to show Iran’s deep military involvement in the Syrian conflict. “The fact is that Aleppo has been occupied by the IRGC and its mercenaries,” MEK told The Washington Times on Tuesday. “Mass executions, preventing the transfer of civilians, including women and children, [and] attacking civilians has all been done by the forces of the mullah’s regime.” 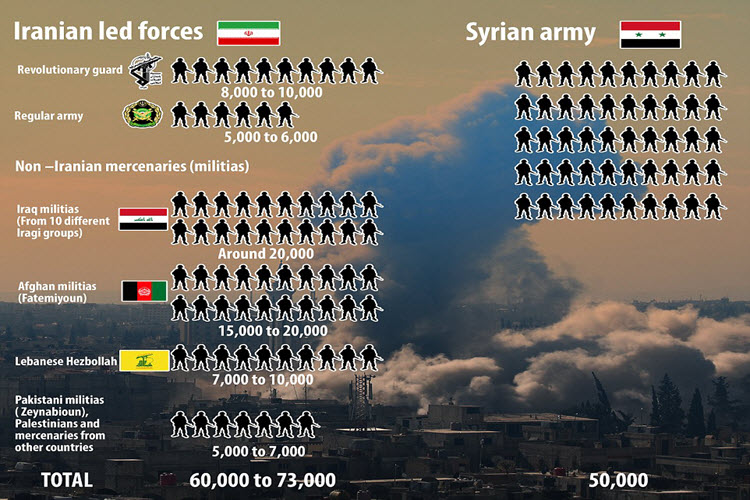 “The obstruction to the transfer of residents out of Aleppo and the two incidents of the killing of residents over two consecutive days were perpetuated by the IRGC and their mercenaries,” said Gobadi. And, according to the report, a convoy of about 800 people was taken hostage and four people were killed at a Hezbollah checkpoint near Ramoussah on Friday.

A similar incident was repeated on Tuesday, when a convoy leaving Aleppo was stalled for nearly 24 hours amid delays in the evacuation of the two Shia villages of Foua and Kefraya in Idlib province.

Delays in evacuation from Aleppo were “procedural” and connected with the need to “synchronise” operations in the two villages, a Syrian military source told AFP.

The MEK identifies Iranian leaders in Aleppo, the locations of bases, the foreign militias doing the killing and how Iran pays them in their report on Syria. The report described the corps amassed — some 25,000 troops in and around Aleppo — and told of an established network of bases around the city to direct the battle.

Gobadi claimed, in the video, that the Iranian government divided Syria into five command centres, with the operation in Aleppo being carried out by a northern command centre in an area called the Sheikh Najjar garrison northeast of Aleppo, and that the main headquarters of the IRGC, is at Fort Behuth, 20 miles south of Aleppo.

Lebanese Hezbollah militia forces and fighters from the Iraqi Shia militia Hashd al-Shaabi —Popular Mobilisation Units (PMU) — were based at the headquarters as well. Spokesman for the PMU, Ahmed al-Asadi, told a news conference in Baghdad that the Shia militia was prepared to fight alongside forces loyal to Assad last October. 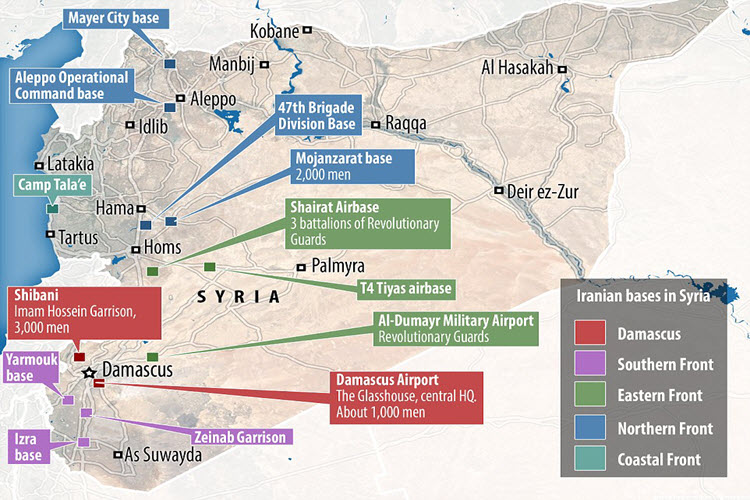 According to the report, the man identified as being in charge of the operation is Javad Qadiri, a veteran commander of the IRGC who has been in Syria for the past three years. He is also close to Qassem Soleimani, commander in chief of the Quds Force, the IRGC unit in charge of Iran’s foreign military operations. The report shows Qadiri meeting with Syrian President Bashar al-Assad and Hezbollah leader Hassan Nasrallah several times this year.

Ayatollah Ali Khamenei’s chief military aide boasts that Assad’s forces would not have been able to retake Aleppo without support from Tehran.
“Aleppo was liberated thanks to a coalition between Iran, Syria, Russia and Lebanon’s Hezbollah,” said Seyed Yahya Rahim-Safavi. “Iran is on one side of this coalition which is approaching victory and this has shown our strength.”

Syrian government forces are scarce around Aleppo, and Iran did the lion’s share of offensive manoeuvres, according to the NCRI’s report. At the same time, Soleimani was seen in Aleppo during the evacuation of residents from the besieged enclave. But this didn’t come without cost. Iran confirmed in November the death of more than 1,000 fighters sent to Syria to support Assad’s army.

A nonprofit research group in Washington, The Institute for the Study of War, reported that Iran organized Shia militias in Iraq, to not only fight the Islamic State, but to also deploy them against the rebel forces in Aleppo.

Cyclone Gonu weakens to a storm on way to Iran

Reuters: Cyclone Gonu waned into a storm as it...

AFP: Latin American nations need to be cautious with...