How is Iran preparing for Syria talks in Geneva? 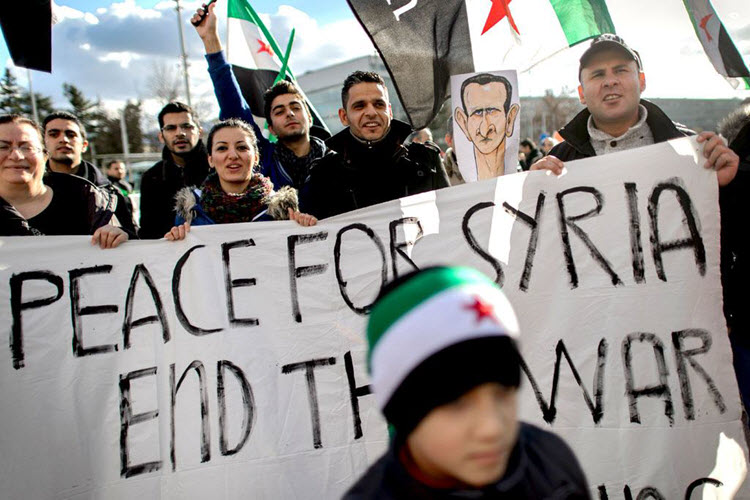 London, 7 Feb – The next round of Syrian talks scheduled for Wednesday in Geneva has arrived. The final statement issued in Astana received a variety of reactions, most being positive as the text focused on cementing a ceasefire and the armed opposition participating in Geneva. The agreement also highlighted the sole possibility of a political solution for the Syria crisis.

Did Iran, being a controversial party, leave the Astana talks satisfied? And how is Tehran drawing its game plan?

To answer this question we must focus on what Tehran first sought to gain from the Astana debate. Was Iran truly seeking a ceasefire?

Certainly not. This is exactly why Tehran and Assad are continuously violating the ceasefire.

Moscow pressured Tehran to give into certain incentives in the final text of the Astana talks. Signs indicate the Syrian opposition has accepted Russia, in cooperation with Turkey, as a party seeking peace. However, the Syrian opposition lacks such a perspective about Iran.
Another question now comes to mind: Why did Iran take part in the Astana talks if it never sought a ceasefire? The answer is simply: Tehran had no other choice.

Iran sought to hinder the political process and negotiations in this regard, especially through violating the ceasefire in Wadi Barada, a strategic area near Damascus. However, Tehran faced unexpected pressure from Moscow.

Russia’s interests in Syria lies in a ceasefire. This, however, signals a serious threat for Iran and Assad.

Russia is warning Iran and Assad over violating the ceasefire. This is exactly why Iran was forced to succumb to a situation and against its higher interests.

The disagreement between Russia and Iran lies in the fundamental dissimilarity of strategic interests. Russia has transformed from its position of staging attacks against the Syrian opposition to preserving the ceasefire and targeting Daesh (ISIS/ISIL) positions.

It remains undeniable, however, the fact that Moscow faces numerous obstacles from the Lebanese Hezbollah, Iran and Assad. Tensions between Russia and Iran are on the rise.

Syria is Iran’s strategic depth, and yet Russia differs in its perspective for the entire region. Time and again senior Iranian officials, including Supreme Leader Ali Khamenei and President Hassan Rouhani, have emphasized the necessity of fighting in Syria.

The practical meaning of such a position for Tehran is to maintain Bashar Assad in power at all costs. This is a red line for the mullahs’ regime. Russia does not share such a stark viewpoint.

Moscow’s calculations in launching its Middle East campaign differed significantly from that of Tehran’s. The Russians’ perspective in regards to this region of the globe consists of a broad international aspect. Moscow considers Syria a platform and springboard for a strong return to the Middle East, in service to global interests down the stretch.

Despite what Iran may boast, a closer look at the final Astana resolution depicts an image of a marginalized Tehran. If the mullahs had refused this text, their position would have been registered as an opposing party, standing against an international initiative.

Yet despite Iran’s obvious disenchantment of any ceasefire in Syria, its signature in an agreement pivoting on a ceasefire status means such a position has been imposed against its will; further meaning a balance of power dilemma is forcing Tehran to give in to such negative circumstances.

A statements emphasizing a political solution, with the Iranian regime’s signature, binds Tehran to safeguard future developments against its own interests. To this end, Iran’s sheer participation in any talks is the utter definition of the mullahs being forced into a major setback. This is the same track of the Iran nuclear deal.

The new Geneva initiative will focus on a political solution in Syria founded on UNSC Resolution 2254 demanding “political transition.”

Such wording spells danger for Iran, as a political transition can be defined into ground-to-earth terms as Assad succumbing to step down.

This is Iran’s red line, knowing Syria without Assad would spell an end to Tehran’s strategic depth.

The solution to end Iran’s involvement in Syria has been echoed time and again by the Iranian opposition, coming from their four-decade-long struggle against the mullahs’ rule.

“The regime in Tehran is the source of crisis in the region and killings in Syria; it has played the greatest role in the expansion and continuation of ISIS. Peace and tranquility in the region can only be achieved by evicting this regime from the region,” said Maryam Rajavi, President of the National Council of Resistance of Iran, the most organized Iranian opposition group, consisting of a slate of dissident entities such as the People’s Mojahedin Organization of Iran (PMOI/MEK).

Russia maintaining its position will render a political process transitioning into the elimination of Assad from his current power role.

While Iran will resist forgoing its position in Syria to the very end, such strategic defeats will inevitably launch a domino effect of irrecoverable setbacks back home.