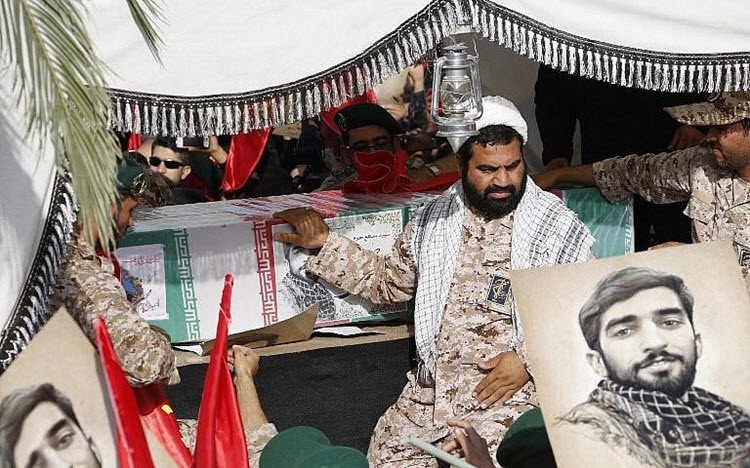 London, 20 Nov – The Iranian regime is known for its meddling in other countries in the Middle East. Its main aim is regional hegemony and it will stop at nothing to get it. One country in particular where Iran is extensively involved is Syria.

Since the beginning of the Syrian civil war, Iran has had some of its own military personnel there and it has funded, trained and armed numerous proxy groups and militias.

Iran’s involvement is particularly toxic because if it had not intervened, the civil war would have ended years ago. It has effectively fuelled the war. Syrian President Bashar al Assad has been propped up by Iran too.

At the weekend, the news agencies reported that IRGC general, Kheirollah Samadi, died from injuries sustained after he was hit by shrapnel following a mortar shell attack.

Furthermore, during the fight to retake the town of Bu Kamal, it was reported that Alireza Babai had been killed in battle. He was a retired IRGC colonel.

In the same battle for Bu Kamal, the only remaining town in the country that is held by Islamic State group, three other Iranian servicemen were killed.

Bu Kamal is located on the border of Syria and Iraq and it was taken by the Syrian forces and their allies. However, in the past few weeks it was taken back by the Islamic State that took control of it after a counter attack.

Al Alam, a television channel in Iran, reported that the forces that took the town were led by Qasem Soleimani himself – the commander of the IRGC’s Qods Force. However, there have been no independent news reports confirming or denying the reliability of the news.

Iran has insisted on numerous occasions that any IRGC officers in Syria are only there as advisors and on the invitation of the Syrian government. They claim the same for Iran’s involvement in Iraq.

As Iran’s meddling continues, leaders in the international community are starting to be more outspoken and are publicly raising their concerns about its belligerence.

There are even people blaming Soleimani’s role in other countries, namely Syria and Iraq, for the rise of the Islamic State. Now that the Islamic State threat has nearly been fully countered, there are big concerns that Iran is waiting for the right time to fill the void it is going to leave.

During his recent resignation speech, the Prime Minister of Lebanon Saad Hariri said that Iran’s involvement and meddling in his country was a decisive factor in his decision. In Lebanon, Iran is gaining more and more influence, and even more control has been obtained via Hezbollah – the terrorist group that is backed by Iran.

Last week, the Foreign Minister of France Jean-Yves Le Drian said that France was concerned about Iran’s goals of regional hegemony and its ballistic missile program.

Reuters: Iran said on Tuesday it would never suspend...